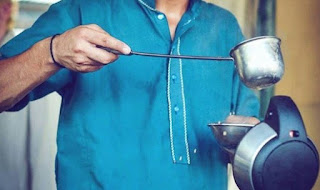 A photographer, the Î¤Î¶Î±Î²Î­ÏÎ¹Î± Allie, pulled him Î†ÏÏƒÎ±Î½Ï„ photo while she was preparing tea for a customer and posted it on …
Instagram with the caption “hot tea”.
A Pakistani outdoor salesman tea with stunning eyes he saw his life changes in one night when he made a photo of that time working around the Internet.
He stated that he had not understood the feeling that had caused the social sites Î´Î¹ÎºÏ…Ï„ÏÏ‰ÏƒÎ·Ï‚ until he saw dozens of boys and girls flocking to the counter where he sells tea to take a selfie with him. The Î†ÏÏƒÎ±Î½Ï„ Han, an 18-year-old with bright green eyes, had initially been so frightened by the sudden publicity he resigned from his job and hid, fearing he had done something wrong. But friends and relatives of the reassured when they explained that the photo was the one who had made him so popular, in order to make proposals to work as a model.
A photographer, the Î¤Î¶Î±Î²Î­ÏÎ¹Î± Allie, pulled him Î†ÏÏƒÎ±Î½Ï„ photo while she was preparing tea for a customer and posted it on Instagram with the caption “hot tea”.
In one night the Î†ÏÏƒÎ±Î½Ï„ caused a sensation on the Internet, with thousands of people sharing the photo with the hashtag #ChaiWala, i.e., a seller of tea.
This photo really changed the life of Î†ÏÏƒÎ±Î½Ï„, who has 16 brothers and sisters and hails from the city ÎœÎ¬ÏÎ½Ï„Î±Î½ in northwest Pakistan. For months he worked selling tea on the street and paid $ 5 a day.
Now, the company of clothing Fitin.pk, which has its headquarters in Islamabad, contacted him for his first professional photo shoot as a model and is now on the first page of the website of the company. “I need money to help my family. I also want to give money to charities all over the Pakistan”, he says, while dreaming of a career in television and film.
The 18-year-old doesn’t know how to read and write, I don’t have a mobile phone, but has a dream: he wants to help the children to be educated. “I’m not educated and I can’t say that I would be a doctor or a judge. The only thing I want to say is that it will help the children who are deprived of education. If I win enough money, I will build schools for the children,” said the Î†ÏÏƒÎ±Î½Ï„ to the AP.
Source