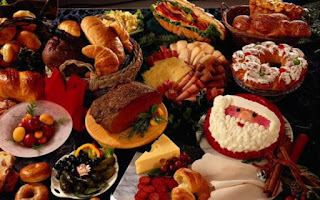 Tips on what to watch dietary the days of… holiday diabetics, cardiac patients, hypertensive and people with gastroenterology problems gives mr. Haris Dimosthenopoulos, clinical dietitian – biologist, head of the department of Nutrition at the city Hospital . As pointed out, these vulnerable groups deserve special attention these days, in order not to end up in the emergency room, where statistically increasing the traffic of incidents such diseases.
Î”Î™Î‘Î’Î—Î¤Î™ÎšÎŸÎ™
Diabetics are now able to follow a more free diet, and the prohibitions are not as strict as they used to, stresses mr Dimosthenopoulos: “of Course, the intake of sweets, the intake of foods that are very rich in sugar, such as starchy foods that accompany the tables, all of these enough fortified rice for the pasta with pine nuts, corn, chestnuts, want a measure, without saying that are prohibited. People with diabetes it is good to consume more dilute the sweets of the holiday season, for this we say to leave a margin for themselves on the eve, or Christmas day or new year’s Eve, and not the whole ten days. Certainly when sitting at the table, the presence of the salad, the fiber will be something that will help so that the sugar content of the body and the body after a big meal, not to go too high, always work like a brake on the absorption of glucose from food. With regard to the alcohol recommendations for people with diabetes is the same as the recommendations relate to and the rest of the population. Up to two glasses of wine or another drink for men, up to one for women”.
Î¥Î Î•Î¡Î¤Î‘Î£Î™ÎšÎŸÎ™
Attention to the presence of salt, as long as it takes, because we usually eat out or at other people’s homes, so it is difficult to control the quantity says mr. Dimosthenopoulos on hypertension: “hypertension sufferers can mostly avoid foods with enriched salt, the hidden sources of salt, such as cheese, nuts, as it is the same starchy e.x the bread is a salty food. So if I can reduce the salt in what you eat , you can definitely reduce the addition of salt to their food through these sources. With regard to the drink clearly and wants a measure that we have mentioned for diabetics, although for this group it would be better to avoid alcohol”.
ÎšÎ‘Î¡Î”Î™ÎŸÎ Î‘Î˜Î•Î™Î£
People who have a history of a cardiovascular disease , people who have been through a heart attack or people who have high lipids definitely want a attention these days, as it is a period that has many temptations, stresses mr Dimosthenopoulos: “The food is very rich, usually in added fat, so there must protecting themselves, as it becomes more lean choice of protein, that is, to choose the most lean even seemingly piece of meat, as can abstaining from cheese is rich in fat and salt and, of course, and this group as the diabetics, it is good to eat plenty of salad”.
THOSE WHO HAVE Î“Î‘Î£Î¤Î¡Î•ÎÎ¤Î•Î¡ÎŸÎ›ÎŸÎ“Î™ÎšÎ‘ PROBLEMS
Those who have a history of ulcer disease or any problems with the gut such as ÎµÎ³ÎºÎ¿Î»Ï€ÏŽÎ¼Î±Ï„Î± the other, have particular problems in this period, stresses mr Dimosthenopoulos:” However, they know from their doctor, the nutritionist for them which foods they should avoid. It is mainly the foods that are enriched with nuts, with small seeds, thick skins that are hard to swallow and harassing them. If these people eat the most greasy or most fried and put on a plate to them a normal amount, I wouldn’t put it at risk their body, from foods that they know they bother you. Drinking it is good for us in any case to avoid, because it’s irritating for all of these gastroenterology problems”