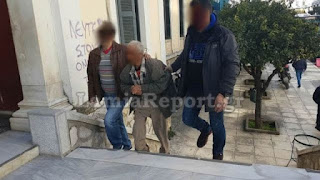 The stairs of the courts of the Lamia went up a little while ago the 65-year-old from the…
Martino Fthiotida killed yesterday afternoon, the husband of his sister on flimsy grounds.
His lawyer Dimitris ÎšÏÎ¿ÏÏ€Î·Ï‚ argued that his client had no intention to kill and that he shot for intimidation. Unfortunately, however, the buckshot hit the son-in-law and killed him.
See the video:

How it happened
According to the story, a woman was carrying rushed to the hospital of Livadeia the 65-year-old man, who had been shot in the abdomen and was badly injured. However the doctors were unable to help the unfortunate 65-year-old, since until they reached the hospital he had left his last breath.
As it emerged, then the 65-year-old shot by a hunting rifle, the brother of his wife in a rural area of Martin close to the fold of the offender.
The victim with his wife had gone to cut wood in an orchard with olive trees. The farmer, 65 years old, holding a shotgun in his hands, he told them to leave the estate, from which they cut wood.
The woman said to her husband to leave, but he wouldn’t listen. The shooter fired a couple of times. A in the air, and one to the husband of his sister. Unfortunately, the shot hit in the belly of the 65-year-old.
The attacker fled, while the shocked woman called a fellow villager, the car which transported the badly injured man to the hospital of Livadeia. Unfortunately, it was too late.
Some time later the police spotted the offender to be moving with the car in the Martino and they arrested him. With him was the murder weapon.
The 65-year-old farmer allegedly told the cops that he shot his brother in law why he told him to leave the estate, for which they had differences, and he didn’t leave.
Source