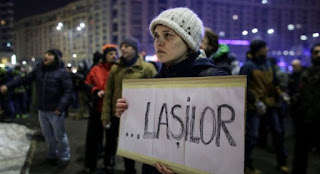 At Least 250,000 Romanian…
took to the streets today in dozens of cities around the country protesting against a government decree which provided for relaxation of the regulations of the penal code against offences of corruption of the political class and which is considered the largest setback in reforms in the country after the accession of the European Union in 2007.
As reported by several local media, the unprecedented in volume demonstrations were the largest demonstrations since the fall of the communist regime in the country in 1989.
In accordance with everything that transmits the Athenian Agency, the Supreme Council of Magistracy (CSM) earlier today submitted a complaint to the constitutional court against the decree of the social-democrat government of the Duo Î“ÎºÏÎ¹Î½Ï„ÎµÎ¬Î½Î¿Ï….
Between 130.000 and 150.000 demonstrators had gathered in the evening outside the building meeting of the ministerial Council in Bucharest, while still 100,000-150,000 citizens, according to police estimates, marched in yet 55 cities in the country.
The ordinance approved Tuesday night by the members of the cabinet.
“Check out and then leave”, “Thieves, thieves”, chanted the protesters with many of them to brandish national flags of Romania.
The government decree, if approved as it is estimated, within 10 days, will allow among other things to a lot of politicians to avoid criminal charges.
This will end the trial that is underway against the leader of the social democratic Party (PSD) of Romania, Liviu ÎÏ„Î±Î³ÎºÎ½Î­Î± accused of exercising political influence to ensure the state payroll two people who worked at the party in the period between 2006 and 2013.
Dozens of other politicians from all parties are expected to benefit from the decree.
“I don’t understand why the protesters are upset,” said Tuesday night the ÎÏ„Î±Î³ÎºÎ½Î­Î± reporters. Prosecutors of corruption they are investigating at this moment over 2000 cases of abuse of power.
President Klaus Î“Î¹Î¿Î²Î¬Î½Î¹Ï‚ that participated in the emergency meeting of the Supreme Judicial Council, stressed after the press. “The problem is that no one can act the way the government has acted in a country with rules of law, where Romania is and wants to remain”.
“The fight against corruption must proceed, not to be beaten. We are following with great concern the latest developments in Romania”, stated the president of the European Commission Jean-Claude Juncker and vice president Frans Timmermans in a joint announcement earlier today.
Six western countries, among them Germany and the united states, issued a joint statement warning that the move of the government will undermine the international reputation and position of the country in the EU and NATO.