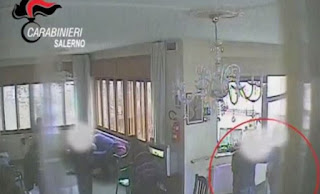 See the outrageous video – The staff are not even allowed to use the toilets…
A stir cause the images from a private nursing home where the workers hitting, cursing and threatening the elderly.
Eighteen people involved in the investigation of the prosecutor’s office in the south of Italy for abuse of the elderly. It is for the workers and the director of a private nursing home near the town of Salerno, in the region of Naples.
In a video which caught the carabinieri, with hidden cameras who managed to place, one can distinguish the workers slap elderly,to the ÎµÎ¾Ï…Î²ÏÎ¯Î¶Î¿Ï…Î½,to push and to threaten them.
The thirty “guests” of the nursing home could not, often, to communicate with their relatives, while many times the staff are not even allowed to use the toilets.
“Will you go to the toilet only when you’re ready to die” and “don’t get up because I’ll break your head”, is heard to say the staff in the elderly located in the living room of the nursing home of Salerno.
In the meantime, the house of Rome has today adopted a law which allows it to be placed closed-circuit cameras in all kindergartens, kindergartens and nursing homes in the country, “to combat violent behaviour against defenceless children and elderly people”. The final green light, will now have to be given with the positive vote of the senate.