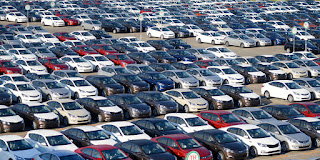 The rise recorded in the Greek car market in November in… relationship with the corresponding month of 2014, with the same rate (17,6%) recorded a drop in October. The statistical data showed that the classifications have reached the 5.859, compared with 4.983 a year ago.
Overall, the ÎµÎ½Î´ÎµÎºÎ¬Î¼Î·Î½Î¿ January-November 2015 the registrations of new passenger increased by +6,4% in the corresponding period of 2014. According to the Press release of the Association of Importers ‘- Representatives ‘ Cars (AIDS) “progress on registrations of new passenger from the beginning of the year Î±Î¹Ï„Î¹Î¬Î¶ÎµÏ„Î±Î¹ to increased car sales to rental companies, long term lease and business groups, and, even with this progress, the car market is -73,2% lower on the average for the decade 2000-2009”.
First brand for a month was Toyota, which holds a market share of 11,2% of the Greek market. Follow Volkswagen (8,8%), Nissan (8.7 Percent), Opel (8,1%) and Peugeot (6,8%).