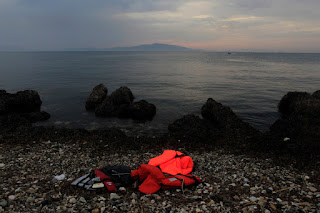 Read the announcement: “SCREAM Î‘Î“Î©ÎÎ™Î‘Î£ THE TEAM united rescues
Completely helpless 55 refugees in Farmakonisi, babies, pregnant Î³Ï…ÎºÎ±Î¯Î½Î±, people with health problems
Good evening/good morning
The group, united rescues informed us that there are people in Spain without food and exposed to the cold.
Specifically, the information they gave us is that the time 00.28 and day 30/12/2015 arrived in Spain a boat with 55 people in total.
Including 20 children, 4 and maybe 5 of them under the age of 18 months.
It is mainly Syrians and Iraqis, and a family of Afghan origin.
Among them is a pregnant woman in the 8th month, is 25 years old and is advised for light bleeding when I arrived, which was later stopped. He also has a daughter of 18 months who had a high fever.
There is also a woman of 65 years with a significant problem in the kidneys, which you should drink only water, filtered or bottled.
Also a person with mobility problems.
In the last communication of the team with them (22,15 time in Greece) they said That they Have not been given any food, only water early in the morning.
Speaking with one of the people who are in Farmakonisi, the team was informed that the water they have been supplied with when they themselves walked up to the military base, and after they gave the soldiers told them to return to where they were.
The group also informs us that at 13.00 uk time sent email to the Port authority of Leros with the coordinates of the location where people are as requested.
People are exposed to the cold for 2 days. Their trip started on 29/12 and lasted many hours.
Among other things, there was telephone communication with the Port authority of Leros first time on 23.20 m.m. The official answer of mrs. Î“ÎºÎ±Ï„Î¶Î¿Ï was that it “definitely would have taken food why is the army there and takes care of them. Because the information that we had from the refugees was completely different was asked to confirm officially that people have gotten food. Was asked to be a new telephone communication within a quarter to a prior communication with the military base in Spain.
In a new telephone communication at 11.35, the competent authority of the Port authority of Leros assured that the people have received food.
He asked her to pass on at least the pregnant woman and the children to someone inside and he told me that on the island there is a doctor and a gynecologist and that people are not outside but inside the container.
PEOPLE HAVE A NEED AND AT HIGHEST RISK-THE STATE LET TAKE FINALLY THE RESPONSIBILITIES OF THE
Once again, in the most inhumane way, it turns out what is the essence of the european so-called immigration policy. Halting of migration flows”, Fortress Europe, the War against migrants, in cooperation with the regime of Erdogan that during the same period, there is more and more information about the collaboration with the ISIS, while conducting a dirty war against the people of the south-East of Turkey and it is certain that will soon cause new rivers refugee misery.
So while this is all done with the full support of the united states, E.E. and the Greek government, in the waters of the Aegean sea appears and acts the European coast Guard, new frontiers of Shame rise everywhere, Concentration Camps, invading Greece, where the government SYRIZA-ANEL plays a key role in the display of this unprecedented brutality.
Militarisation of the european migration policy-control-recording-exploitation of refugees-deportation of immigrants.
And the murdered children increase…
And the desperation mounts…
And the tragedy of the refugees-immigrants go hand-in-hand with the official right-wing extremist and brutal treatment of refugees-migrants.E. and the Greek government…
With the only ray of humanity, interest, contribution and solidarity, the volunteers and the social movements that show in every way, in every opportunity that within any nation there are two nations, the oppressors and the oppressed, on the contrary and hostile interests, with the world of work to resist to the sirens of the ÎµÎºÏ†Î±ÏƒÎ¹ÏƒÎ¼Î¿Ï of Brussels, the official governments, the MEDIA, le pen, Sarkozy, and of the Golden Dawn.
These people share the agony and attempting to strengthen the cry of despair.
Because our fellow human beings immigrants in Farmakonisi are tested hard, they need our solidarity, and especially the requirement for us to intervene directly in the state services and to give a solution.
In any case, should immediately be given every assistance by the official state authorities.
Î‘ÎÎ¤Î™Î ÎŸÎ›Î•ÎœÎ™ÎšÎ— Î”Î™Î•Î˜ÎÎ™Î£Î¤Î™ÎšÎ— MOVE”