He returned to Greece by the troika 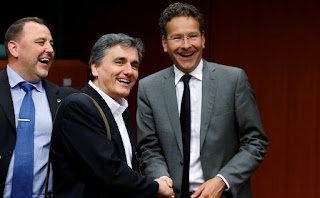 Returns in Greece, the troika next Î²ÏÎ¿Î¼Î¬Î´Î± in order to record the completion of the prerequisite before the end of the month…
but to lay the foundations for the second assessment, in accordance with the relevant Commissioner, Pierre Moscovici, who briefed the Press after the end of the meeting of the Eurogroup.
Pierre Moscovici explained that Greece has avoid the grexit, which featured a great achievement, but what is needed is a “success story” and as to this he pointed out that “there is still a lot of work that needs to be done” to conclude that it is “confident that we will make it”.
On the other hand, the President Dijsselbloem stated that there were intensive discussions on the reasons for the delays, but stressed that the timetable should be adhered to, so if you follow the next few moves that has already been decided for the program, such as the analysis of debt sustainability and the involvement of the IMF.
In relation to the debt the President Dijsselbloem stated that “there were detailed discussions” and described in the schedule by the involvement of the IMF, which called it a “very cooperative anymore.”
From the side of the ECB, Benoit ÎšÎµÏÎ­ called for a timely effort for the energy and privatisations. He said that the quick completion is in the interests of all, and noted as positive the fact that the Central Bank of Greece reduced the ELA, an indication that the access of the banks is being restored gradually.
Î¤ÏƒÎ±ÎºÎ±Î»ÏŽÏ„Î¿Ï‚ and Eurogroup have agreed on a timetable for completion of the evaluation
The need to achieve rapid completion of the prerequisite in order to quickly start the 2nd assessment and to be addressed immediately in the short-term and medium-term measures for the Greek debt, he concluded the discussion of the Eurogroup for Greece, which was completed early Friday afternoon.
A government source pointed out that in this need, that is, of the execution and settlement of the measures for debt before the end of the year, has not expressed any objection, not even from the German side.