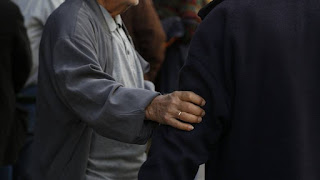 End to the employment of pensioners puts the law ÎšÎ±Ï„ÏÎ¿ÏÎ³ÎºÎ±Î»Î¿Ï…, as well as provides that the pension will be reduced by…
60% for retirees who began working after the 12 May.
The new settings will be applied to the set of insurers that are part of the National Social Security Institution ( Î•Î¦ÎšÎ‘). Such a reduction will be made on the gross amount of all pensions received, main and auxiliary. In particular:
-Pensioners under 55 years of age benefit that will not be suspended fully their pension, but will be slashed 60% of the amount of. You will therefore receive part of their pension while at the same time will work.
-Pensioners over 55 years of age but are affected significantly in comparison with the previous regime. That is, until May 2016, pensioners who worked as employees with a contract of dependent labour were normally the amount of the gross main pension, or the sum of pensions of up to 970 euro (30 salaries an unskilled worker), while the excess amount paid reduced by 70%.
No longer will be truncated without distinction, 60% of the total gross amount of the pension. Indicative of a pensioner who received a pension of 1,200 euros (gross) will be received normally, with the current regime, the amount of approximately 1.039 euros (gross) for as long as employed. With the new law will take the amount of 480 eur (gross) from the pension.
The insured with 35 years with the new method of calculation, if yes, is overpaid, they will suffer heavy casualties in comparison with other categories of pensioners. E.x.: employee of the Public with 35 years of insurance and ÏƒÏ…Î½Ï„Î¬Î¾Î¹Î¼Î¿ salary 1.646 euro with the old system will retire 1.075 euros, while with the new system the pension is 829 euro.
Source