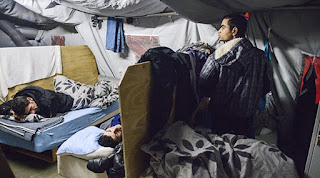 It was approved Tuesday afternoon by the House of Denmark…
controversial law for the seizure of money and those precious in the possession of immigrants seeking asylum in the nordic country.
The announcement of the proposal was the subject of intense criticism, however, finally managed to pass by the parliament of the country whose authorities claim that in order to request the corresponding benefits to the unemployed of Denmark, the refugees arriving in the country should at least sell their assets!
According to the british BBC, the new law provides that the refugees will arrive in the country will be able to keep items of value up to 1.340 euros, while you will have the ability to not lose items of sentimental value, like wedding rings, etc. All the other objects that you have with them will be seized.
Yesterday it became known that the measure is to be implemented in Denmark, intends to follow in Norway, as it is considered to impose a “luxury tax” for refugees, i.e., seized part of the money and the valuable items they carry.
As proposed, the refugees will be able to keep an amount that is approximately 1.100 euro and the rest you will have to deliver them, and all their valuables.
This is the measure applied in the previous month, Denmark, which has met with great opposition from human rights organisations, the international MEDIA, even from within the government itself.