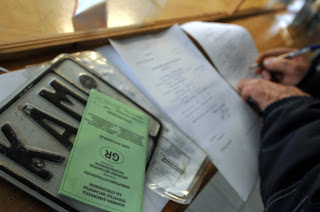 Significantly reduced recorded from the morning…
the move to the central tax offices of the prefecture of Thessaloniki, with the head of the TAX office to report to the Athens News Agency that until yesterday was filled to capacity, the announcement of the Finance minister, Tryphon Alexiadis on a tv show for an extension of the deadline for submission of license plate, put on the brake “in the frenzy that prevailed”.
With the phrase “the taxpayers are faster on the update than we are”, the head of the DEPARTMENT, Kalamaria, Joachim Î–Î¿Ï…Î¼Ï€Î±ÏÎ¯Î´Î·Ï‚, pointed out that the move today to the Irs is particularly sluggish. However, with the information so far available to him, pointed out that recorded slightly reduced the deposit of license plate I.X. vehicles and motorcycles, although, as he hastened to clarify “is increased as 80% of the new assets”, in relation to December 2014. However, until yesterday they had filed more than 2,000 signs in the WORK of Kalamaria, while it is recalled that last year the equivalent figure was forming in 2.400.
Tranquility prevails and the WORK F, with the head of the Irs, Dimitris Î£Î¹ÏŽÏ€Î·, stresses that “until yesterday it was crazy”. “While the department of car during the year works with an employee, every year these days we back it with extra,” he said. With regard to the plaque deposits, mr. Î£Î¹ÏŽÏ€Î·Ï‚ pointed out that the move at last year’s level and pointed out that “some get it back within 2-3 months, but there are those who have left the service for more than four years”.
A corresponding picture show and the WORK A and Naples, with the head of the Kalliopi Hatzopoulou and Friday Lelouda, respectively, to stress that the turnout at the Tax inspectorate continues from the morning, but, but everything else run smoothly, in contrast with “pandemonium and the Î¼Î¹ÎºÏÎ¿ÎµÎ½Ï„Î¬ÏƒÎµÎ¹Ï‚ between taxpayers had until yesterday”. As stated, this year more people have testified the license plate of the vehicle and the motorcycle in as much as 20%, compared to last year, while significantly increased the transfers of real estate.
On the other hand, less it seems that it is the taxpayers who deposited the plates in the TAX office A, since, according to mr. Hatzopoulou, “so far, recorded a slight, but fewer, compared with last year”.
Source