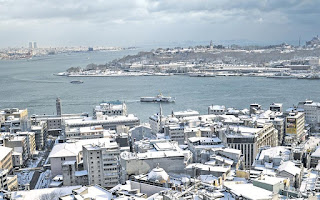 Hundreds of flights to and from Turkey were cancelled…
today and tomorrow at the two airports of Istanbul after the city was covered by thick snow, resulting in a closed, also the schools and paralyzed road traffic.
The company Turkish Airlines cancelled 265 flights to and from the main Ataturk airport of Istanbul, and 37 flights to and from the second airport of the city, the sabiha. The company low cost flights Pegasus announced he has called off 34 flights with destination or origin of the sabiha. Yesterday, Wednesday, the authorities of Constantinople had already been put on alert more than 1,000 vehicles and heavy machinery to keep the roads open, but warned residents not to move unless there is a need.
The snowfall is expected to continue for most of the day. The ferry traffic in the strait of Bosphorus was upset also, however the water that a channel remains open to traffic.