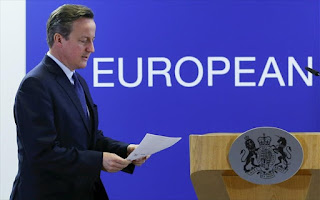 The referendum on the eve or not of the United Kingdom in the… the European Union could take place “within months”, if the rest of the countries – members of the European Union in support of the draft agreement on the Brussels – London, David Cameron said.
“We have only a few months for the holding of the referendum, in the event that we achieve this agreement. If this is achieved, then immediately there will be a notice of the date,” said the British prime minister.
The president of the European Council, a body which brings together the 28 eu heads of state and government of the E.E., Donald Tusk, presented earlier, a series of proposals that will form the basis for the preservation of Britain within the european union.
The proposals, which are mainly related to ensuring the equitable nature of the countries of the european union.E. not participating in the Euro area, ensuring that the British taxpayers will not pay for needs of the euro area and the possibility to cut welfare benefits to eu citizens.E. the first four years of their stay in the United Kingdom, you will need to be approved at the Summit of the “28” in mid-February.
In this case, mr Cameron has stated that he will lead the campaign on the eve of The.B. in E.E..
Information british media about a referendum, even in June 2016.