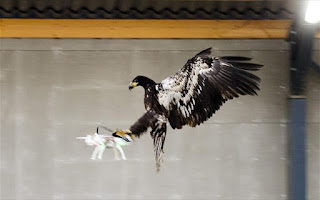 The police authorities of the Netherlands, concerned about how they could remove from the air the small, unmanned aircraft that pose a risk to public safety, they experience an original and… ecological solution: to train eagles to hunt.
“This is a low-technology solution in the face of a problem that creates the cutting-edge technology,” said a police spokesman Dennis Janus.
This idea arose because more and more amateurs flying radio-controlled airplanes and the authorities are worried that some of these may make their appearance in places where you are prohibited such flights, such as near airports or various events, such as gatherings of political parties.
Some of the solutions, studying the police authorities is to “fish” with nets of the potentially “threatening” airplanes, to intervene from a distance in their electronic systems to bring under their control or even to break down with the help of predators.
“People often think that it’s a hoax, but so far is proving very effective,” noted Janus.