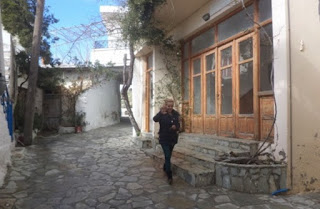 Near forty years they left the relics of considerable historical and folklore collection of an avid collector… Kostas Spyridakis in Kerame of the municipality of Agios vasilios Rethymno, and since they live “in warehouses”, unused, and away from the common view. The… luck, but the damage they have suffered these forty years in the darkness, they did this in oblivion of time, without to date, there has been some interest from relevant local factors. And since the collection still remains in the… unclaimed, the inhabitants of the Ceramic… heard the … and request the return of the birthplace of the collector, so as to be exposed in the halls of the old elementary school and is for the people, Greeks and foreigners, “interesting museum visits”.
This view is supported by the resident Manolis Î‘Î»ÎµÎ²Ï…Î¶Î¬ÎºÎ·Ï‚ that notes: “for So many years in the warehouses of the old prefecture of Rethymno and exhibits see only… darkness! We can’t understand what’s going on, but requirement of the villagers or to return to the village where he had spent the donor or to be exposed to any area of Rethymno and visit the world. It is unthinkable! None of us know leaving here, they told us they were registered, how many have arrived in the warehouses and in what situation they are today. We all want to be returned…” “EXCELLENT COLLECTION”
Items for the collector and the relics, lists the author and teacher of Rethymnon, Kostis E. Papadakis( Kerames and Agallianos, Common path through time p. 226 and 227), noting that the Costas Spyridakis, “in Kerame, in the years 1964-1976, worked an extremely remarkable private collection Î¹ÏƒÏ„Î¿ÏÎ¹ÎºÎ¿Î»Î±Î¿Î³ÏÎ±Ï†Î¹ÎºÎ¿Ï content, product industriousness and toil”. The marking “furious Ï€Î¿Î»ÏÎ¶Î·Î»Î¿ collector” and the exhibits, the “dedicated to the village of” transferred in 1964 in a private place in the village…
The museum was donated to the village, but “due to a failure to keep and utilize ceded it to the municipality of Rethymno, which, and that, “due to lack of competence, she didn’t keep it, so they ended up in the prefecture…”. However ,the same questions today, “what is the fate of all this Î¹ÏƒÏ„Î¿ÏÎ¹ÎºÎ¿Î»Î±Î¿Î³ÏÎ±Ï†Î¹ÎºÎ¿Ï wealth”, and concludes by expressing his deep sorrow, “the village lost through the hands of a wonderful and priceless treasure”.
THE BACKGROUND BANNER According to the reports of mr Papadakis, the collection contained many historical relics of the Cretan and Greek Revolution, such as weapons from the cretan and national revolutions as well as the historical banner of the Ceramic in 1821″.
However, in the same reports “there were plenty of ancient coins, Greek, and of the Cretan State, ecclesiastical items, old gramophones, watches, sewing machines and lanterns, wood carvings, edge tiles, stamps, binoculars, swords, sculptures and bas-reliefs medals and decorations, costumes, textiles and embroideries, various tables, household items, agricultural material, jewelry and books, up to very old koran…”
Kostas Spyridakis was a cabinetmaker of the Ceramic, and “although non-specific, it was a very good connoisseur of many historical and archaeological topics” and many of the museum items bought from flea markets in Monastiraki or other cities of Greece that were visiting, since it “frequently like to travel by “hobby” but a keen interest…”– Source