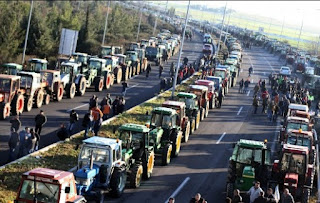 Writes a Spell
Can the C. Katrougalos, featuring fantasies of the scenarios on the… is removed and the Maximos Mansion to shows that it is not a question with the minister, but no one can predict what will happen if the lenders insist on absurd claims. That is, the twelfth in order of passage of the pension.
This time the controversial bill the government is subject to withdrawal. And the minister, C. Katrougalos, on the substance, make fools or madmen of hundreds of thousands of people have taken to the streets and millions of people boiling in awe throughout the country, assures that the negotiation with the institutions for the “reform” of the Insurance will have a “happy ending”!…
Two things need to happen. Or that he is not aware of the dramatic impasse in which they have received from the negotiations, or that he plays with communication Ï‡Î±Î¶Î¿Ï‡Î±ÏÎ¿Ï…Î¼ÎµÎ½Î¹Î­Ï‚, in order to gain time, and see if lenders show a mood of political flexibility and, therefore, not rupture, in order to achieve an “honorable compromise”…
However, things have come to the last thing of concern to me is the ending, ÎšÎ½Î¯Ï„Î¹ÎºÎ·Ï‚ of origin, minister.
The government headquarters is seeking, urgently, a way out from the stranglehold created by the blockades of the farmers on the highways. Already, the government’s agenda is being withdrawn gradually, the plan B, which includes the targeted reduction of the auxiliary and, where appropriate, and some high-major pensions, the increase of tax rates in the, so called, high income and of the parallel -limit least – improvements in the insurance of farmers and members of the professions. At the same time, the government headquarters and prepare a series of immediate measures to support farmers, which will essentially be the lever for the start of the dialogue.
The government measures are necessary to contain elements of strategy development of the primary sector with the upgrading of crops, a drop in the cost of, strong partnerships and the provision of free scientific knowledge from Universities and Research Centres.
Today, the rural world, maybe it wasn’t in the checkpoints, whether by the memorandum obligation to “reform” the Insurance was filed and the plan of reform of the primary sector.
Let’s remind the government what they were saying when you claimed the governance of the country.
“In SYRIZA we are seeking an agricultural production of rationally organized, that will respect natural resources, protect biodiversity, and will produce quality products that will change the patterns of consumption and nutrition, while encouraging free collective forms of production (cooperatives), linking agricultural production with research and also holds the world, especially young people, in their place, promoting a new quality of life in the countryside and in the region. We propose an integrated program of rural development in regions, increase of public investment for primary production, processing, marketing, infrastructure marketing of agricultural products, effective support of young farmers”.
Many of these, who do not have financial costs, should, already, to have been made by a Left-wing government!