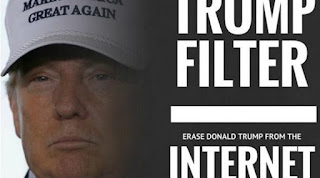 Many are those who have been bothered by the presence of Donald Trump in the… electoral battle for the emergence of the candidate of the Republican party for the presidency of the united states, both outside and within the united states.
The extreme and often racist views, which are expressed in a very insolent manner, obviously, have a lot of enemies.
Among them, a developer named Rob Spectre, who decided to create an anti-Trump filter to get rid of him and those who still want the loud-mouthed mogul.
So it created a extension in Chrome which can be used to block any reference to a text or a picture of Donald Trump when surfing the internet. The so-called Trump Filter scans of the pages that the user visited, searching keywords related to the candidate of the Republican party, and accordingly proceeds to the blocking of the page.
The initiator of this programme has, in fact, provide several “levels” of operation of the filter, so as to customize each one how Trump can bear to look at it in everyday life. It is certain, however, that those who go to the trouble to integrate it into the Chrome probably will be the end.