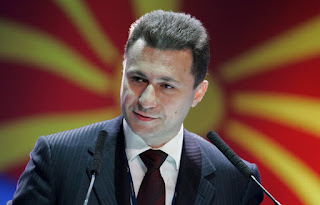 Significant political developments are expected in the next few days…
in Skopje, on the basis of the agreement of the heads of the four largest parties from 15 July 2015, with a view to the political deadlock in the country.
On 15 January, under the agreement, will be set to a caretaker government, which will lead the country to early parliamentary elections, at the end of April. A few days earlier, the prime minister of Î£ÎºÎ¿Ï€Î¹Ï‰Î½ Nikola Î“ÎºÏÎ¿ÏÎµÏ†ÏƒÎºÎ¹ will resign in order to pave the way for the formation of the caretaker government, the chief of which will come from the ranks of the party VMRO-DPMNE, which is led by Nikola Î“ÎºÏÎ¿ÏÎµÏ†ÏƒÎºÎ¹. The name of the caretaker prime minister has not been notified yet,while the New. Î“ÎºÏÎ¿ÏÎµÏ†ÏƒÎºÎ¹, when asked about, said that the decision about who will lead the caretaker government will take the next few days the organs of the party.
The developments relating to his resignation and the formation of a caretaker government, confirmed yesterday, Nikola Î“ÎºÏÎ¿ÏÎµÏ†ÏƒÎºÎ¹, who repeated that we fully respected the timetable for the elections on 24 April.
However, the opposition states that the participation in the elections depends on the fulfilment of the conditions of those who will ensure fair and democratic elections and accuses Nikola Î“ÎºÏÎ¿ÏÎµÏ†ÏƒÎºÎ¹ that bring obstacles to the implementation of the planned agreement for the resolution of the political crisis in the country.
In fact, some members of the opposition point out that we need to be postponed for a few months or more elections that are scheduled for the end of April, in order to create the appropriate conditions for a “fair” election.
From the side, the New. Î“ÎºÏÎ¿ÏÎµÏ†ÏƒÎºÎ¹ rejects these allegations of the opposition and accuses you of looking for excuses to postpone the elections in April, fearing that it would suffer overwhelming defeat.
THE N. Î“ÎºÏÎ¿ÏÎµÏ†ÏƒÎºÎ¹, who is in power in the country since 2006, is categorically against the possibility of a postponement of the April elections, as it is absolutely certain that it will prevail in these and wishes the whole situation to clear up and return to the prime minister as soon as possible.
Against the likelihood of a postponement of the April elections is in and the largest Albanian party in Macedonia, the DUI of Ali Î‘Ï‡Î¼Î­Ï„Î¹, which is part of the government of Nikola Î“ÎºÏÎ¿ÏÎµÏ†ÏƒÎºÎ¹.
However, the last time appear again serious disagreements in the talks between the government of Nikola Î“ÎºÏÎ¿ÏÎµÏ†ÏƒÎºÎ¹ and the opposition of Zoran Î–Î¬ÎµÎ² on the application of a series of measures provided for by the agreement of 15 July, resulting in a “fluid” stage.
The whole situation might become clearer during the visit in Skopje, the next time, the Commissioner for eu Enlargement.E. Johannes Hahn, with the help of which an agreement was reached in July to resolve the political crisis in Skopje.
Mr Khan,in a letter sent the previous time to the heads of the four largest political parties in Skopje expressed concern about the problems relating to the implementation of this agreement.
The Brussels seem to be concerned about the ongoing disagreements between the government and opposition in FYROM, which “polarize” the climate and threaten the process of resolving the political crisis in the country.