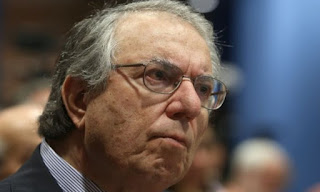 In special event, which…
organised at the Strovolos Municipal Theatre in Nicosia, the president of the Republic of Cyprus, Nikos Anastasiadis, was awarded to distinguished professor George Babiniotis, the Prize of the Public benefit, Scientific and Cultural Foundation “Photos Photiades”.
The president of the Foundation, Fotos Fotiadis, said that at a special meeting of the Foundation, decided unanimously to honour professor George Babiniotis with the Award, and to proclaim him an Honorary lifelong president.
He noted that the members of the BOARD of directors of the foundation have resulted in this decision, whereas the long, multi-faceted and comprehensive offer of the Greek university, professor of Linguistics, the systematic scientific investigation, study, interpretation, etymology and the spelling of countless words in the English language as well as the long and fertile, over nearly half a century, offer as a professor of linguistics at the University of Athens, the invaluable services of the office of the dean of the same University, of the office of the minister of Education and Religious affairs and president of the Historical Î‘ÏÏƒÎ¬ÎºÎµÎ¹Ï‰Î½ Schools across the country, many educational and other institutions.
It also reported that taken into account, “the rare research interests and scientific activities with active participation in scientific societies, boards and in Greek and foreign scientific conferences”.
Mr. Fotiadis stated that as a further expression of recognition, respect and love, the Foundation, in consultation with the ministry of Education and Culture and the Ministry of Defence decided to offer copies of the new dictionary of professor Babiniotis ‘dictionary,’ a Dictionary of derivatives and compound of the modern Greek.
The children and grandchildren of the words of our language”, in all the universities, Secondary schools and in the newly formed Academy of Defense, Security and Crisis Management.
The minister of Education and Culture of Cyprus, Costas Kadis, reported that the last of the fruit of the work of mr. ” webster’s new dictionary, aptly titled, is considered for the readership and, in particular, their teachers, their students and their students “a valuable tool of knowledge as to the exact meaning and the proper use of the words”.
The material organised and coherent information assembled in this publication, a record of the historical evolution of Greek language from antiquity up to our days, and demonstrate the structured, functional, and creative nature, added mr. Kadis.
Mr. ÎœÏ€Î±Î¼Ï€Î¹Î½Î¹ÏŽÏ„Î·Ï‚ in a speech about the new project stated that “the symbols that expressed the Greek people with the Greek language where on Earth, I had the ambition, the effort, the courage, to put my life in the service of the rendering of the Greek language”.
Featured in the Greek language, with “giant” and said: “A humble linguist stood up and tried to describe and to write.
The approach that I wanted to do, and it seems from the result that something made it”, he said, “it was an effort of people who are experts in the subjects of language, dedicated connoisseurs of the language of science, and this distinguishes and separates the dictionaries of my other older or newer dictionaries that are also important.”
“The children and grandchildren of the words of the Greek” is the sequel to the timelessness of the language, how the first elements of the language come in and created new items, highlighted and stressed: “This is the second dimension of our strength, the synchrony of 40 centuries of Greek language”.
According to the professor, what differentiates the Greek language, is the sequel to, oral and written, for 40 centuries in the spoken language, for 35 centuries of the written word. This, he continued, “it’s unique, it’s power, and woe if we don’t believe that, if you don’t utilize and damned if you don’t teach”.
He said that when you tried to compile this dictionary, had in mind to give an x-ray of Î»ÎµÎ¾Î¹Î»Î¿Î³Î¹ÎºÎ¿Ï thesaurus of the Greek language. “To take every word and give you the range in which there is as the core, the word. To give the halo of each word”, he noted.
Mr. ÎœÏ€Î±Î¼Ï€Î¹Î½Î¹ÏŽÏ„Î·Ï‚ mentioned that the main characteristics of the Greek language is the trinity, language-mind-world, which determines the human existence and distinguishes it from all other forms of the animal world.
He also stressed that the language above all is “value” and “national identity”, and noted that the language of each people’s culture, the history, the thinking, the psyche, is everything, that has an existential character”.