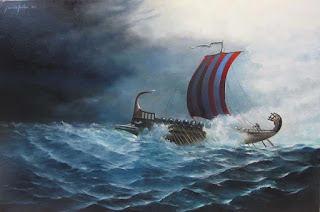 Writes Constantine Î’Î¿Ï…Î»Î³Î±ÏÎ¬ÎºÎ·Ï‚
“Humanity, progresses in a spiral (circular) rotation of recurrence of events and situations …. and this is a well-documented scientific theory”, I remember that you explained to us, an excellent History teacher, in the School of War!!
It is therefore logical that the fall of an Empire follows the rise of another, the long period of peace, a period of intense turmoil and conflict, the period of economic prosperity and growth in a period of recession and economic crisis, the period of social progress and cultural flash, followed by a period of depreciation, degradation and obscurantism, the carefree extroversion to succeed skepticism, the ÎµÏ€Î±Î½Î±ÏƒÏ…ÏƒÏ€ÎµÎ¯ÏÏ‰ÏƒÎ· and introversion, just as ….. the light of day succeeds the dark night!!
Without one, it would make no sense!!
I’ve re-reported this, because I think that this development, these changes, is a natural lawhood …. of the balance, an oscillation of a pendulum, for measuring and balancing the time!! The critical well point and the effort of humanity, is (should be), to maintain the “step” of progress and prosperity, more long â€“ more intense â€“ more powerful, than the corresponding “step” of misery and darkness, so that it is created ….. spiral evolution of humanity, and no circular rotation of stagnation!!
Unfortunately, the “periods” the people of each rotation, usually ….. exceed the time limits of a generation!! So, we have generations of prosperous and generations of suffering!! The generations that thrive, consider this progress as an achievement, as a consequence of the effort and the capacity, while, on the contrary, the generations who succeed in recession, in depression and in the turmoil, a charge the inconvenience and all the problems, the “previous” ….. they don’t have, not cared for, not ….., that was ….., that the right stole everything and left them with nothing, to live …. to support and to press on him and them, as they did!!
What is the truth and what the lie!? Who is right and who is wrong!? Who is right and what is wrong!? Benefits or not, such a dilemma!?
The previous generation was a generation of gifted Î´Î¿Ï…Î»ÎµÏ…Ï„ÎµÏÎ¬Î´Ï‰Î½ that created wealth or a generation ….. lucky heirs, they found ready a fortune, whether as a “base of support” them, and then they took care of it wisely to make use of it ….. or simply, have behaved like spoiled rich kids, who took care of treating ourselves carefree and unconsciously, to eat you to the bone, to leave a legacy to next!?
WHO will judge the generations …. WHO will tell you what’s wrong!?
Causes, we can find many and legitimate, but always ….. for the previous!! And this is logical, because the right and the wrong, always considered a result, where there is no clear procedure, sure path ….. sure of course!! And the life, not sure of course, based on the concern of the unexpected, the uncertainty, and in the search, with the compass of the human capacity of reason and the power of the soul!!
What can I say !? See what is happening around us, near and far, us and all over the world!! Everyone is worried, everywhere fear and suffering, finding the causes in the past, in the past, but nobody – and I mean no one, here and anywhere, it doesn’t say that we’ll get out ahead, what needs to be done ….. here and NOW!!
But, that to charge one in the past, that causes and if found in the past, the only sure thing is that ….. these are past!! May well stay there (in the past), to Î¼Î¿Î¹ÏÎ¿Î»Î¿Î³ÎµÎ¯ and darn, inexpensively and without a future …. or and to learn from the mistakes of the past, to be stronger than the need of the difficulty, to stand upright ….. and to look ahead, with courage and new hope!!
It seems that humanity has arrived at the Zenith of the cycle of prosperity, and now …. tip one way or another on the verge of ÎºÎ±Ï„ÏÎ±ÎºÏÎ»Î±Ï‚, to the Nadir!! Be prepared!? We made it a new generation, our children, strong and able to stand …. standing on the bow, now that our ship, dive violently deep in the wave!? At the helm now, sitting Able-bodied or Accidental!?
It’s not …. from where you started, but …. you want to go!!