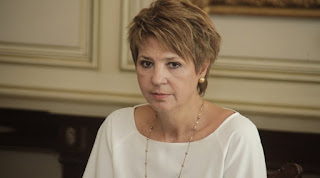 For the difficult bills that must pass by the House and coherence inside the government majority, the government’s representative Olga Î“ÎµÏÎ¿Î²Î±ÏƒÎ¯Î»Î· said that the country is at a critical juncture and the government is here for, not to say if it difficult for a bill but to give a solution which promotes the society and will be judged on the results. “We have in front of us the insurance, the management of red loans, a medium-term program, to get to the first assessment. We quickly and effectively to address these critical issues that will chart the course of the country for many years in the future,” he said and added: “We are fully aware of the criticality of the moment. We have tabled a proposal for insurance is a proposal which redistributes in favour of the middle and lower economic strata, it ensures sustainability in the system and has a concept of law,” said the government spokesman, speaking on the Real.
For the criticism of the proposal to increase insurance contributions, mrs Î“ÎµÏÎ¿Î²Î±ÏƒÎ¯Î»Î· noted that an increase of 3 or 7 euro is not that which will destroy the market, which is facing other problems, and that it is preferable not to reduce the pensions which are falling in the market give liquidity.
For the insurance of farmers the mr Î“ÎµÏÎ¿Î²Î±ÏƒÎ¯Î»Î· said that we will have an increase in the contributions of farmers, but gradually, by 2020 will reach 20%, i.e., everyone contributes to the insurance. He also mentioned that the farmers is lower, the basis for the calculation of contributions, in relation to the rest of the policyholders. Mrs Î“ÎµÏÎ¿Î²Î±ÏƒÎ¯Î»Î· featured important step in the separation of by profession a farmer, in order to restore balance and justice. “The way that ensures the protection of the poorest farmers, because it is not the same a farmer in the Area on the mountain with a Î¼ÎµÎ³Î±Î»Î¿ÎºÏ„Î·Î¼Î±Ï„Î¯Î± in a large rural lowland area. And in this we must be righteous,” said the government spokesman.
“He has given writing samples Kyriakos Mitsotakis”
The government representative wished him good luck in Kyriakos Mitsotakis and expressed the hope that “the SW to find the political stigma so we can all see who will be the ultimately the way policy on the part of”.
Mrs Î“ÎµÏÎ¿Î²Î±ÏƒÎ¯Î»Î· noticed that it wasn’t pleasant, the fact that for a long time the SW was in the process of electing a president, which is both a respected fully process, but it was a serious matter, because the official opposition has the role to contribute to judging and suggestions, in a fertile dialogue. He said that the dialogue, in the process of electing a new president, was restricted to the who will be the more “bad” against the government and SYRIZA and who would threaten her more. “Unfortunately, the dialogue was limited in this climate without hearing a political speech on the substance,” he added.
Especially for the president of the SOUTHWEST Kyriakos Mitsotakis said that it is not a tabula rasa, is a politician who has given evidence of policy which is sufficiently neo-liberal, far away from everything that is preached today on the centre of the centre-right view. “He lives to watch then who will decide to be the regular and the new line of the SOUTHWEST” said mrs. Î“ÎµÏÎ¿Î²Î±ÏƒÎ¯Î»Î·.