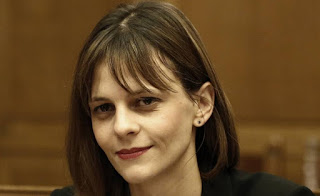 The intention of the government to tackle unemployment in the Region through a targeted for the programme area, expressed by the minister of Labour Efi Î‘Ï‡Ï„ÏƒÎ¹ÏŒÎ³Î»Î¿Ï…, after the completion of the meetings he had yesterday with the administrations of the labour centres of Orestiada and Alexandroupolis.
The minister referred to a stable government position on collective agreements, he stressed that there will soon be a legal framework for companies that violate the labour legislation and made particular reference to the interventions for the sugar industry.
In particular, the mr Î‘Ï‡Ï„ÏƒÎ¹ÏŒÎ³Î»Î¿Ï… noted that the meetings with the administrations of the labour centres demonstrate that we respect the right to organize, the people representing the workers, and the whole historical process of representation of the workers”. Featured substantial movements of the ministry as to the recording of the specific problems of each region and concrete solutions, to the extent that this is possible, but also symbolic with regard to the depreciation suffered by the syndicates and the labour centres in previous years.
The minister of labour made special reference to the strong and decisive as he called for government intervention to operate the sugar industry in Orestiada and is the carrier of economic activity that supports the region, as well as in the business “Marinopoulos” to find a successor situation. He reiterated that the intention of the government is to support in every way in the world of work, noting that “If we didn’t want to help their employees or to give battle will not ÏƒÏ„Ï…Î»ÏŽÎ½Î±Î¼Îµ legs for collective agreements in the assessment”.
Stated that there is awareness of the outbreak of atrocities as recorded by the daily complaints to both the ministry and the Labour Inspectorate phenomenon that can be addressed with the reintroduction of collective agreements, as well as “when you have a union, a collective agreement at sectoral level to create some of the basic terms, a safety net then, and the phenomena of the employer’s arbitrariness are reduced”.
Made it clear that the intention of the government is not even one euro of public money in companies that violate the labour legislation, the intention of which, as he said, soon will be translated and institutional framework.
It is noted that the minister was accompanied by meetings of the special secretary of the Labor Inspectorate, Thanasis Iliopoulos as well as the three members of Evros of SYRIZA, Giorgos ÎšÎ±ÏŠÏƒÎ±Ï‚, Natasha Gara and Dimitris Rizos.