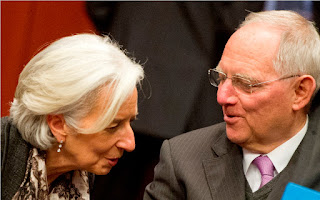 Article which highlighted the conflicts of Europeans with the IMF and the interests that are played, and on the occasion of the Greek problem, publish the Financial Times…
As highlighted by the british newspaper, the remarkable thing that emerges from the recent report of the Fund for Greece is that these discrepancies, especially for the issue of debt and primary surpluses, expressed largely by the european member â€“ states, which, as noted, may be perceived as a conflict of interest. And that’s why the representatives of these states act and in the light of the political aspirations of their governments a year, with critical elections.
“The european states have excessive representation in the Fund compared with the percentage that they occupy in the global economy. That use their power to prevent the IMF from claiming relief on debt is a clear conflict of interest and constitutes a threat to the credibility and independence of the institution, it is features in the article, adding:
“The member of the Euro area, through their representation in the Fund seek higher surpluses, is undoubtedly affected, at the same time having in mind the impact it will have on their governments for a possible write-down of Greek debt. And the upcoming elections, especially in Germany and France, essentially make any concession to Greece, is significant as to the cost of”.
“At the same time,” continues the article, “the conflict has upset the Greek government and, through its intransigence, the Eurozone may lead to a change of government in the country. This could lead the centre-right opposition in a better agreement, however, the short-term political manoeuvres is not the right way to get the Greece in the long-term path of debt sustainability and financial stability”.
In addition, the FT’s critique in the Euro area, which, as they put it, “firmly oriented to overambitious fiscal and development objectives, rather than accept the need for more external financing and, if necessary, even an impairment of debt”. In conclusion, the FT, referring to the conflict within the Fund, highlight:
“The rest of the member – states must be ready to reject (point of view) of Î´ÏÏƒÏ„ÏÎ¿Ï€Ï‰Î½ european. The categories for the climate of self-interest need not be an obstacle on the road to the best interests of Greece. The governments of the Eurozone have not been stand on the height of the circumstances in this matter. And they deserve to be defeated”.Source