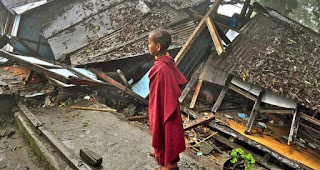 In most low rate from 2009 was…
in 2015, the cost of natural disasters touching 90 billion. dollars, reported today the company Munich Re, in its annual report on natural disasters.
Many tropical cyclones have affected the 2015 sparsely populated areas and in the North Atlantic the natural phenomenon El Nino has been a barrier for strong storms, explains in a statement the group. Of the 90 billion dollars recorded damage, the 27 billion was insured, specifies the Munich Re.
“However, the relatively limited amount of damage should not make us relax preparedness”, warns the reinsurance company, which the research department for climatic and geological risks it analyzes the developments. “Scientists start from the principle that the current phase of El Nino may succeed in the years to the contrary, a phase of La Nina, which, conversely, promotes for example the formation of hurricanes,” he explains in the notice of Peter Hop, head of the department of Geo Risks Research.
Last year, the most expensive and also the most deadly disaster was the earthquake in Nepal in April. Cost the lives of 9,000 people and caused economic damage of â‚¬ 4.8 billion.
Overall, about 23,000 people lost their lives from natural disasters, much more than in the previous year (7.700 deaths), but much less than the average of the last 30 years (54,000 a year). Almost all the disasters of 2015 (94%) was due to weather phenomena.
Source