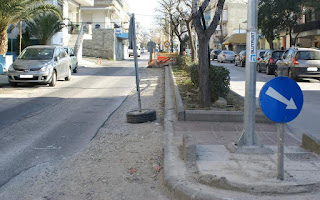 A great and critical intervention, such as the upgrade of the main road…
axis of the road Î•Ï€Ï„Î±Ï€Ï…ÏÎ³Î¯Î¿Ï… in D.E. Sykies municipality of Neapoli-Sykies, arrived at the starting point of the implementation.
This is for the complete reconstruction and paving of the pavement with the use of modern anti-slip carpet, turning the street in its entirety in a safe road, wiping out all of the damages have emerged in the last few years the burden due to the increased traffic of heavy vehicles.
The paving of the road, with a budget of over 1,000,000, was one of the first priorities of the municipal authority of the municipality of Neapoli-Sykies and the Technical Service. And it starts tomorrow, Monday, February 1, after the races, pressures, demands and negotiations with the administration of the PPC, which this time completes the work Ï…Ï€Î¿Î³ÎµÎ¯Ï‰ÏƒÎ·Ï‚ of the high voltage network.
In fact, the paving will be done gradually and in both directions of the road in entire length (approximately 2 km). from the Ave. Andreas Papandreou until the intersection with the roads of Vermio and Î‘ÏÎ±Ï€Î¯Ï„ÏƒÎ±Ï‚, to “meet” on the street, Kanari, a project of the same contractor that has already occurred, as prior to the paving of the road Homer. Be noted that the original design of the PPC only provided for local and punctual interventions for the restoration of the cuts. 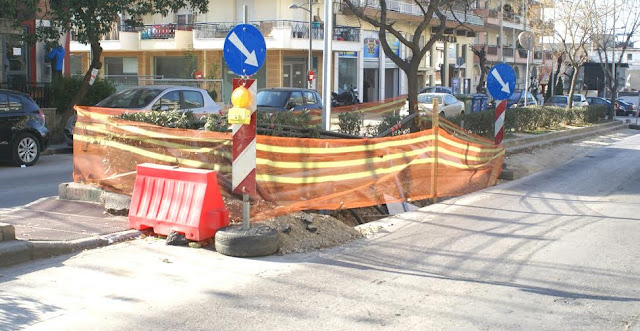 Interruption of movement and diversion of traffic I.X.
The work of paving the road Î•Ï€Ï„Î±Ï€Ï…ÏÎ³Î¯Î¿Ï… will start tomorrow morning (7.30 p.m.) from the height of the Avenue. Andreas Papandreou, with the work to be performed in successive phases. The first will run initially until the street of Epidaurus, section will take its final form in the next few days with the second layer of special non-slip carpet, while the work of paving the entire length of the road will evolve in parallel with the completion of the work Ï…Ï€Î¿Î³ÎµÎ¯Ï‰ÏƒÎ·Ï‚ of the high voltage network of PPC.
So, tomorrow, Monday 1 February, and from 7 in the morning until the end of the work, provided for in the 5 m.m., the movement of the vehicle at the height of the intersection of the road Î•Ï€Ï„Î±Ï€Ï„Ï…ÏÎ³Î¯Î¿Ï… with the Avenue. Andreas Papandreou will be discontinued for vehicles I to.X. The car traffic will be through bypasses, while on-site will be special teams which will facilitate the movement of vehicles, which in the descent of them will be directed to the Avenue. A.Papandreou via the route set of lights.
——————————————————————————————————–
The finest “moves” in Naples…
After the extremely great success of the History lessons that were given in the Fig trees throughout the previous period, from October to today, the People’s Training University (LFAS) of the municipality of Neapoli-Sykies continues the operation in Naples.
The lectures that were given all those months in the context of the Cycle of History embraced by a crowd of citizens, who flocked to the Municipal Library of Sykeon to attend the esteemed speakers. From tomorrow, Monday 1 February, the opening of the “Cycle of Psychology” in the lectures to be made in the Municipal Library of Naples.
The large attendance of the public in the first cycle of the courses in the Fig trees has once again demonstrated the lively interest of the citizens for learning and constant updating, which reinforces the belief that similar success will be met, and the second thematic circle in Naples. The success of this “forcing” the city to renew and strengthen functional and organizational the institution, searching for reputable qualified speakers who will develop the best way issues of everyday life and of contemporary reflection.
In this context, the DETAILS, which this year is in its 12th year of operation in the municipality of Neapoli-Sykies, appeared “refurbished”, so as to the places where you are given most of the lectures (Municipal Libraries), and themed (this year was an emphasis in History and Psychology).
As they note in their message, the mayor of Neapoli-Sykies Simos Daniilidis, and the chairman of the Public utility Company Services Dimitris Î‘Ï€Î±Ï„ÏƒÎ¯Î´Î·Ï‚, “the interventions of special sciences of psychology and mental health, come to strengthen the pedestal on which we can stand and give answers to contemporary burning questions that plague us and to deal with other conditions of difficult situations. Link, and an adhesive substance of these two cycles is the knowledge. And this, we believe, served in the best way through the program that was prepared. And our participation in it only benefits can bring us…”.
The program
The lessons of the Cycle of Psychology are starting tomorrow, Monday 1 February, with the first issue to be presented and analysed by a nurse mental health consultant, substance dependence, and science strain the Prevention Centre “Pyxida” Tasso ÎšÎ¿Ï…Ï†Î¿ÎºÏŽÏ„ÏƒÎ¹Î¿.
This cycle will be completed Monday 25 April 2016 courses are given in the Municipal Library of Naples (Î‘Î¼Î±ÏƒÎµÎ¯Î±Ï‚ 21), while the participation is free of charge.