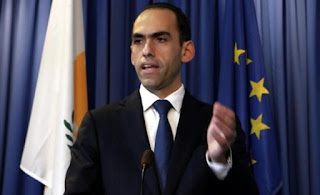 There is a “recipe” for the exit of a country from the Memorandum? There is, says the minister of Finance of Cyprus Harris Georgiades and implemented successfully the cypriot government, which bids farewell to the Memorandum of the March.
The basic prerequisite for this to work the “recipe” is the implementation of the programme, the eradication of timidity for early termination of measures, the consolidation of public finances and, of course, the avoidance of heavy taxation. In an interview with mr Georgiadis, indicate how and in what way it cooperated with the troika, when it found itself in a difficult phase and even gives you tips on how to return Greece to growth.
As mentions mr. Georgiadis in the Step, The negotiation on the cyprus programme was not at all smooth. To remind you that the application was tabled by the previous government. This was done with great delay, a year after the loss of access to international markets.
The large volume of the trading was done again by the previous government but was completed, after another year, almost, by the government of Anastasiades when the crisis took on dramatic proportions, with the collapse of a large systemic bank, and the loss of deposits. And we have paid a heavy price for this delay. Since then, we look ahead by implementing an ambitious but necessary reform effort.
We tried to work with the troika and we utilized the confirmatory seal of the institutions in our efforts to convince the markets and investors that we are, indeed, a path of healing, without this meaning that we didn’t have our disagreements.
Features to report to you that as the summer of 2014, there was a strong pressure for additional taxes and cuts.
We had a different point of view, we had faith in our design, we saw that the economy was on track to correction, that with improved and public revenues, and we believed that any new measures would have exactly the opposite effect. I finally had to admit defeat and ended the year with a marginal and only a deficit of a decrease of 0.2%, far exceeding the initial estimates. But generally not faced with the troika, with the lens of the confrontation either, but we wanted to keep it longer than needed. There is certainly a lot that still needs to be done, but we will continue with our responsibility”.
Referring to Greece, says: “I Recognise that there has been a great effort in Greece, and the citizens have paid a heavy price. But there was the impression in the circles of the lenders and the investors that the effort lived always incomplete, that there was vacillation and delay in the application. That certainly cost me”.
Source