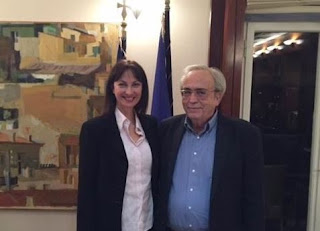 Read the announcement: “Important issues of competence of the Ministry of Culture, which touch and… actions of the Ministry of Tourism in preparation for the new season of 2016, was discussed at the working meeting of the two Ministers, on Friday 4 December.
Mrs. Kountoura discussed with mr. Cleaver, for the designs the commencement of operation of new archaeological sites, as at Rhamnous Marathon, as well as for initiatives on the issue of electronic ticket of the archaeological sites and the possibility of discounts in the buy them from the tourist offices.
Also discussed the need for the timely operation of archaeological sites with extended hours, from the beginning of the tourist season, as well as proposals for cultural actions for the promotion of the city-break tourist destinations.
Finally, reported in the design of a new legislative framework for the intellectual property rights of artists and the protection of the business, as well as to attract foreign audiovisual productions, as a lever to strengthen the tourist promotion of Greece, and boosting our economy.”