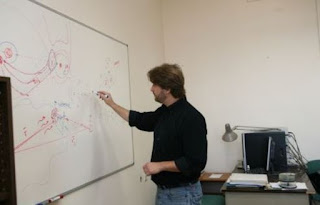 Dr. Kleomenis Î¤ÏƒÎ¹Î³Î¬Î½Î·Ï‚, assistant professor in the Field of Astrophysics and Astronomy, Department of Physics, Aristotle…
University of Thessaloniki, awarded with the prize “Paolo Î¦Î±ÏÎ¹Î½Î­Î»Î±” for 2016.
The Î¤ÏƒÎ¹Î³Î¬Î½Î·Ï‚ was awarded for his studies on the dynamics of the solar system and other planetary systems, and especially for his contribution to the development of the “Model of Nice”, which relates to the development of the Ï€ÏÏ‰Î¯Î¼Î¿Ï… solar system. This study was the period that he was still a postdoctoral researcher.
This model describes the “migration” of the major planets (Jupiter, Saturn, Uranus, Neptune) on current trajectories during the early phases of the creation of our solar system. While it gives explanations of the movements of comets and of asteroids in our solar system.
The award of the prize took place in the framework of the annual conference of the American Astronomical society and the European Congress of Planetary Science, that take place together in California. During the honor event, the Greek scientist gave a speech with the theme “Chaos in the Asteroid Belt”.
The annual award was established in 2010 in memory of the Italian scientist Paolo Î¦Î±ÏÎ¹Î½Î­Î»Î± (1953-2000) and each year honors a prominent researcher to 47 years of age.
Source: ana-MPA