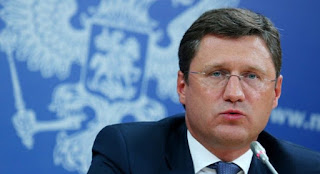 Russia will produce 548 million. tons (11 million. barrels per day) of oil next year, which is a record in the ….
the post-soviet era, however, Moscow continues to want to reduce the global production amid weak prices, said today the minister of Energy Alexander Novak.
Russia, the largest oil producer in the world, expects that the members of the Organization of the petroleum exporting Countries (OPEC) would find common ground for the limitation of the production of crude. The next meeting of OPEC is scheduled for November 30.
Before the meeting, Novak will carry out many trips, including to Saudi Arabia for the Weekend and Vienna next week.
He stated that it would submit “a few” proposals at the meeting with his Saudi counterpart and that it believes that it continues to be necessary, a freeze of the production. He refused, however, to give further details on the proposals.
Asked about the need for there to be a freeze of the production, said: “Yes, that is our basic position has not changed”. Novak stated that he will discuss the coordination in oil markets with the Secretary-General of OPEC, Mohammed ÎœÏ€Î±ÏÎºÎ¯Î½Ï„Î¿ next week.
Source