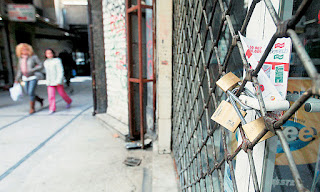 The increase in employer contributions, even 1%, it increases sharply for a small business….
the cost of operation, stresses in a statement on the matter, the president of the Professional Chamber of Athens, John Î§Î±Ï„Î¶Î·Î¸ÎµÎ¿Î´Î¿ÏƒÎ¯Î¿Ï….
He argues that, if implemented this proposal, the small businessman will proceed to cut staff in order to keep open his business. Another possibility, according to mr. Î§Î±Ï„Î¶Î·Î¸ÎµÎ¿Î´Î¿ÏƒÎ¯Î¿Ï…, is the sharp increase of “black” labour, “to salvage some of the middle-class, jobs.
For freelancers, as reported by the president of the chamber, already, there are many people who study the case of closure of books within the prescribed time limits, “as well as the threatened increases in the contributions, it is now a prohibition on any activity”.
On the other hand, mr. Î§Î±Ï„Î¶Î·Î¸ÎµÎ¿Î´Î¿ÏƒÎ¯Î¿Ï… underlines: “in no case, of course, do not agree to the reduction of pensions. Something like that would be a disaster for the citizens, economy, society. We must not forget that hundreds of thousands of businesses are directly dependent on the purchasing ability of the citizens. The reduction of the income of the Greek citizen, will inevitably lead to the decrease in consumption. Small shops where is currently surviving on the markets of the pensioner and the employee, we see “sinking” of the already reduced revenue. And in this case, the negative consequences will be painful, as our country tends to become the country Ï‡Î±Î¼Î·Î»Î¿ÏƒÏ…Î½Ï„Î±Î¾Î¹Î¿ÏÏ‡Ï‰Î½ and unemployed”.
For the rescue of the insurance, so the solution is just to focus on development and not on the cuts. “Only if they create new jobs, increase the income of the insurance funds, you will get ahead of the market, you will multiply the taxpayers who will pay arrears. The application only measures of austerity without any growth sign, it is a failed policy mix, something that has shown amply in the recent past. Development here and now, limitation of austerity measures, support of entrepreneurship, a restart of the economy. This is the recipe to exit the crisis,” concluded mr Î§Î±Ï„Î¶Î·Î¸ÎµÎ¿Î´Î¿ÏƒÎ¯Î¿Ï….
Source