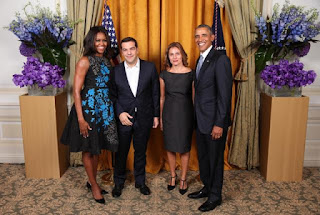 New details for the role of Bill Clinton in the signing of the memorandum in the summer of 2015, as well as for the pressures…
the president of the united states Barack Obama to prime minister Alexis Tsipras, and to the former president of the united states, brings in publicity to the Russian network Russia Today, citing Wikileaks.
Wikileaks, in response to the revelations of the admonition of the White House in the Clinton administration to mediate to the Greek prime minister to sign the memorandum, has published a response dated the 10th July 2015, in which the chief of staff of the electoral campaign of the wife of Clinton John Podesta, correspond with the chief of staff of a former president of the united states Tina Î¦Î»Î¿ÏÏÎ½Î¿ÏŠ. This made the question of whether Clinton can intervene in the Strike. “The White House asked if Clinton has such a good relationship with Tsipras in order to call him and advise him as to consent to an agreement,” says Podesta.
Greece was faced with bankruptcy and exit from the EU after five years of hard austerity. In the days preceding the mailing of this, mr. Tsipras had said to the people “say no to ultimatums, no to blackmail”, reports RT. Then came the referendum on 5 July, when the Greeks rejected the agreement.
Even an e-mail with the same date is referred to in Greece. Amitabh Desai, advisor to the Clinton Foreign Policy, he contacted his chief of staff White House Denis Mac ÎÏ„ÏŒÎ½Î¿Î¿Ï….
“We are already in close contact with the people of Merkel this week before the visit of president Clinton in Bosnia, and given the Merkel visit to Bosnia earlier this week if it needs a boost for Merkel -if she needs a push in the Merkel -to get Clinton to call Merkel in order to seek guidance for Bosnia, and then randomly ask her for the Greece at the end”, wrote the advisor to the former president.
“We would welcome a boost to the Chancellor, with the way you propose,”replied the chief of staff of Obama, and continued: If you all have time tomorrow morning in Srebrenica, we now believe that a phone” would also be very useful.
The office of the Barack Obama mentioned the points which I had to discuss Clinton with Tsipras, underlining “the importance of staying in the euro for both political and economic reasons”.
The Foreign Policy advisor of president Clinton, replied: “it Is happy to do it and we’re all happy to help. We got in touch with the people of Merkel before departure and we hope to contact her tomorrow, and I’ll contact you tomorrow morning with the Money when we land in Sarajevo”.