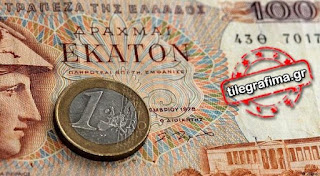 The mishap of 2015, it doesn’t seem to be a lesson for some…
The society groaning under the weight of the economic crisis, apprentices wizards continue to play with the fate of the country and its citizens.
Alexandros Eleftheriadis
There is a lot of people who are in favour of the drachma. I’m not talking about those who hope that this will feed the partisan army by putting the suckers to pay taxes. I am not referring to those who make propaganda through television… Î¬Î¼Î²Î¿Î½Î¿Ï‚ having taken their money abroad. Even for the salaried employees of different lobby, eager to rush in our country. Apart from the cheats who dream of the drachma, there’s plenty of honest people who believes that a return to the national currency will be the solution.
People are simple, everyday, tired, worn out, exhausted mentally, and financially. People who don’t know what are the interest rates on loans, the depreciation of the currency, the immediate need for imports of essential goods such as fuel and medicines. These people understand them. Remember the old, good (that?) days of our country and believe that with 5000 drachmas will make the week. Is not obliged, moreover, to perceive that the times we reminisce about the currency it was national, but the money would come out of it with loans. These people, yes, because it is the most weak, is at the same time, and the reason for that cause more anger statements such as today’s by Nikos Xydakis.
What did the parliamentary representative of SYRIZA in? That the national currency is not a taboo. Then, of course, tried to dispel the impressions, but the substance doesn’t change. But the question is why he said it.
Got, no way. Because after the… proud of a 17-hour negotiation of Alexis Tsipras, in July of 2015, everyone in SYRIZA became terribly careful in the matter of a penny. … Careless, moreover, took elsewhere with the sailing of freedom to make… mint side. So why all of a sudden mr. Xydakis was not able to hold back his words?
Carefully careless
The interpretations are many. One of them says before they sign on all of the measures promoted by the IMF and the European Union, in order to stay a little longer in power (and the wages in euros) they want to scare the world. Another says that you really believe. With polling to indicate the end, the return to a national currency is their only hope. With this they could maintain the partisan army at the expense of those who do not belong to the elite. There is another scenario, of revenge, but that would exceed the most morbid imagination.
In each case, however, and whatever the motive of those who ÎµÎºÏƒÏ„Î¿Î¼Î¯Î¶Î¿Ï…Î½ such expressions, the damage they do is immeasurable. Our country is plagued by unemployment, young people migrate to be saved, the investments come with the… snorkeling, and the government of the country doesn’t know what currency we will have tomorrow. A great idea which will surely attract foreign capital and will open jobs. Unless we’re back to the fact that we don’t want foreign investment, or domestic (see Greek) in order for the world to work in the Public and to our needs.
Our country after 1.5 years of apparent calm returns again in a state of uncertainty. Time is running out, the clock is ticking and nobody can know what tomorrow will bring. As shown, however, the ship called Greece, the captain will abandon it last, after he has thrown with fury into the iceberg. No, not by sacrifice, but by a refusal to let go of the wheel.