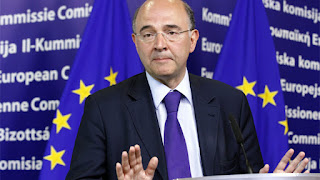 If the Greek government achieve tangible…
results in the field of tax evasion and undeclared work, then you may increase the scope for reduction of income tax.
The relative labelling made a commissioner Pierre Moscovici in response to a question of the mep of SYRIZA, Dimitris. Papadimoulis. In particular, mr Moscovici stresses that “the reform of tax systems is a national responsibility,” and continues emphasizing that “the scope for reducing taxes on income from work will increase, as well as efforts to combat tax evasion and undeclared work will begin to produce tangible results”
Finally, the Commission, through the Commissioner, expresses “its satisfaction with the intention of the Greek government to proceed to reforms that aim at a fair distribution of the tax burden in the framework of the implementation of the programme of the European Stability Mechanism which was signed in August of 2015”.