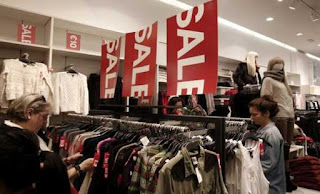 In the newsletter for the Discounts and working Sundays for the year 2016,” the Commercial Association of Athens, on the basis of article 15 of law. 4177/13, indicate that the periods of discounts for 2016 are as follows:
– The winter sales will begin Monday, 11 January 2016 and will last until Monday 29th of February while the summer sales will last from Monday 11 July to Wednesday 31 August 2016.
– The interim discount periods are from Saturday 3 May to Saturday 10 May and from Tuesday 1 November to Thursday 10 November.
– Finally, on the basis of article 16 of n. 4177/13, the operation of commercial stores in the year 2016 it is allowed optionally to the following Sunday, 17 January, 24 April, 8 May, 17 July, 6 November, 11 December and 18 December.