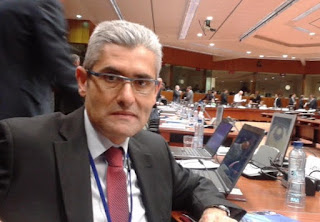 From the main newscast of SKAI and years ago he had warned of the…
upcoming refugee and immigration crisis the lawyer and ÎºÎ±Î¸Î·Î³Î·Ï„Î®Ï‚Ï„Î·Ï‚ Criminology Angel Î¤ÏƒÎ¹Î³ÎºÏÎ®Ï‚, because of his status as a representative of Greece to the Standing Committee on Operational Cooperation on Internal Security in Europe (COSI) of the Council of the EU, was able to be aware of the dangers that might lie ahead for our country.
Yes, he had repeatedly stressed in public assistance for the necessary measures to prevent the uncontrolled illegal migration through the territory of greece.
Among other things, has proposed the following:
“Illegal immigration is a common problem of the countries of the European Union (EU) and therefore needs a common and radical treatment. Necessary consequence of the observance of collective agreements by all, without exception, the countries that have signed up. Turkey should respect International Law and the agreement signed for the readmission of irregular migrants. Should be strengthened with staff and resources – the European coast Guard (Frontex).
Among the proposals that should immediately be adopted by the member-states of the EU are: 1) The suspension of community aid to the countries of origin that will not show a spirit of cooperation in the prosecution of the networks that smuggle illegal immigrants. 2) The strengthening of controls. 3) closer cooperation in the issue of visa. 4) The increase of the community assistance to Greece, Cyprus, Malta, Italy, Spain and Portugal, which are sensitive external borders of the EU.”.
The simultaneous application of all of the above proposals could provide a convincing answer to the current impasse._