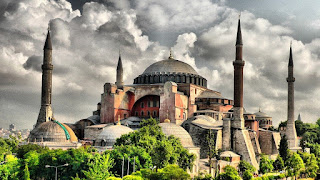 The Hagia Sophia is the first building…
ringing in the eyes of the visitor, as it enters from the sea of Marmara. This special point, had chosen to build their temples, centuries before the Byzantines, the pagans.
The first church of St. Sophia was founded by the Great Constantine in 330 m.X. when he called later Constantinople capital of the Byzantine Empire. The construction of the temple was completed by his son ÎšÏ‰Î½ÏƒÏ„Î¬Î½Ï„Î¹Î¿ and it was inaugurated on 15 February 360.
During the time of Arcadius in 404, the first Hagia Sophia was burned and built again by Theodosius Ii.
The exhibition will be inaugurated on 10 October 415, but the church will be burnt down again in 532, during the Stop of the Nica. Thus, the emperor Justinian A’ decides to build the church from the beginning, in the same space, but much more commanding, dominating the Reigning.
The foundation of this magnificent temple will be scored on 23 February 532, with plans drawn up by architects Î‘Î½Î¸Î­Î¼Î¹Î¿Ï‚ Î¤ÏÎ±Î»Î»Î¹Î±Î½ÏŒÏ‚ and Isidore of Miletus.
For the completion of the colossal project they have worked tirelessly for six years to 10,000 craftsmen, while it spent us $ 320,000 pounds (about 120.000.000 euros).
From every point where there was Hellenism, became offer: The green marbles of the Mani and the town of Karystos, rose from Phrygia and red from Egypt. From the rest of the world were offered the precious gems, gold, silver, and ivory, for the decoration of the interior.
It was inaugurated on 27 December 537 by Justinian, who, seeing the superiority of Hagia Sophia against the famous temple of Solomon, he exclaims: “oh, Thank God for the ÎºÎ±Ï„Î±Î¾Î¹Ï‰ÏƒÎ¬Î½Ï„Î¹ with Ï„ÎµÎ»Î­ÏƒÎ±Î¹ such work. ÎÎµÎ½Î¯ÎºÎ·ÎºÎ¬ to Solomon”.
For a thousand years (537-1453), the Hagia Sophia will be the centre of orthodoxy and hellenism. There, the people will celebrate the triumphs, lament the suffering and glorified him in their new emperors.
The last operation took place in 29 May of 1453. The emperor Constantine Palaiologos of A Î”ÏÎ±Î³Î¬Ï„Î·Ï‚, after you have prayed together with the people and apologized for the mistakes I probably made, left for the walls, where he fell fighting. After the fall of Constantinople, the Hagia Sophia became a mosque, and with the revolution of Kemal Ataturk it was transformed into a museum.