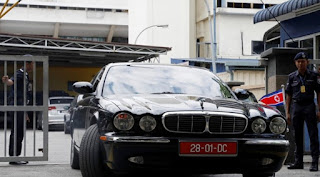 The Malaysian authorities…
they announced that they had arrested a woman from Myanmar in the context of the investigation for the death of Kim Jong-Nam, half-brother of North Korean leader Kim Jong-un, as he transmitted the malaysian agency Bernama.
The woman was arrested at the Kuala Lumpur international airport, according to the agency. The police announced that she was alone at the time of the arrest, and he had a passport of Vietnam.
Currently there are no known other information.
In the meantime an autopsy is expected to take place today on the body of Kim Yong Nam, who allegedly was murdered mysteriously at the airport in Kuala Lumpur Monday.
The 45-year-old, eldest son of the deceased North Korean leader Kim Jong Il who lived for years in self-imposed exile, it seems that he was poisoned by two women, who escaped in a taxi. Some media have spoken of a poisoned needle, while the other for a liquid thrown in the face of Kim Yong Nam.
The murder of one, a few days before the celebrations in North Korea for the birth of Kim Jong Il, was presented by Seoul as proof “of the barbarism and inhumane nature” of the Pyongyang regime.
From the side of the police of Malaysia is mainly dealing with the video from the tv, closed-circuit of the airport to understand what happened Monday morning.
“Kim Yong Nam said the staff at the entrance of the departure area that he was grabbed from behind by the face and forced him to inhale a liquid,” said Î¦Î¬Î½Ï„Î¶Î¹Î» Î†Ï‡Î¼Î±Ï„ commander of the police, according to the malaysian newspaper The Star.
“She asked for help immediately, and was admitted to the clinic of the airport. At that time he said he hurt his head and that he felt that he would faint,” he added. “The clinic has suffered a heart attack. They put him in an ambulance, and his death occurred en route to the hospital, the putrajaya district,” explained Ahmad.
Today, the remains of Kim Jong-Nam was transferred to a police escort to the hospital of Kuala Lumpur, where forensic experts will try to identify the causes of his death.
The south Korean ministry of Union confirmed that the dead man is Kim Jong Nam, who was once presented as the successor of his father.