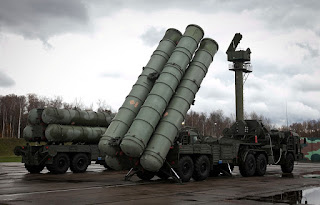 A strong message from the Russian General…
Viktor Bondaryov, commander of the Russian air forces in Syria,to Turkey. â€œWhoever is a Turk fly in the airspace of Syria will come crashing downâ€,is the meaning of what he said.
The interview was given in Russian MEDIA but has been republished by the Turkish newspaper Cumhurriyet.
The Russian General says among other things that the anti-aircraft systems S-400 have not been developed in the territory of Syria not to be used. He added that any move by Turkey would have a similar answer.
Viktor Bondaryov Ï…Ï€Î¿ÏƒÏ„Î®ÎµÎ¹Î¾Îµ that Russia fully controls the airspace of Syria, and that the airlines, in any case, are not in residential areas. He added that these companies will continue with the same and with greater intensity.