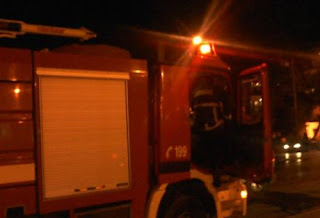 A serious incident of fire in the house had to face earlier today in the afternoon the…
Fire Department of Agrinio.
Specifically at 7:55 pm.m. the call center of the service was for a fire at a residence in Potamouli of D.E. Î Î±ÏÎ±ÎºÎ±Î¼Ï€Ï…Î»Î¹Ï‰Î½ of the Municipality of Agrinio.
The point rushed for two vehicles with five men who proceeded to extinguish the fire which had spread to the room of the house, without, fortunately, be in danger, and the family that lives there. The fire burned down the room of the house with the furniture that was in it, while the smoke caused damage to the rest of the house. It is speculated that the fire was started by an electric stove.
In multiple incidents in fireplaces that “smoke” was called on the Fire Service of Patras, greece Monday 2 January 2017. At 18.47 in the afternoon, a vehicle with 2 men was contacted and visited the Î’ÏÎ±Ï‡Î½Î±Î¯Î¹ÎºÎ± as a chimney from a fireplace was smoking.
Source