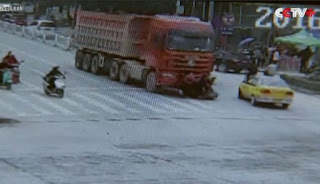 A truck drags three women on a motorbike at a junction pedestrians without, however,…
cause nothing more than slight injury (and the… scare of their life)
A still from the ordinary incidents of everyday madness in China, where the explosive increase of the car (and any kind of vehicle) is not as it seems and the corresponding rise in the level of drivers and their behaviour on the road.
In the pictures from a security camera we see a small scooter with three women passengers, to decide to cross perpendicular to a walkway (reminds you of a little Greece? I don’t blame you…). For their bad luck in the same passage is stopped, and a large truck, which as it lights up the lantern starts.
But the motorbike with the three women is in the worst spot (the so-called “blind spot” of the truck) at the worst time. And the driver of the big rig, without the aware of this-as is natural – drags the bike. Nevertheless, the three women have time to jump before the drift, and these, together with the motorcycle under the wheels.
As we see from the evolution of the incident, and the three women unharmed, and they rise directly from the asphalt sample that have only minor injuries. The motorbike was completely destroyed while the driver of the truck has all the right in the world to ask for the change. For the record the incident occurred in the town of Beiliu in south China, and will definitely get into the long list of strange and dangerous chinese road (until the next).