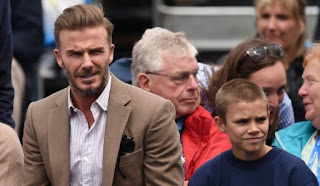 Uproar has broken out…
social media from leaking messages from the e-mail of David Beckham and relate to the charitable activities and the cooperation with Unicef.
Messages leaked by a group that calls itself a Football Leaks and published on the website Mediapart. Based on what the former ace of the land all these years he used the charity action for their own benefit, promoting companies and having as goal to get a Knighthood (“Sir”).
Beckham admitted that some of the messages he wrote on the nerves, while others have been tampered with.
In some of the messages reportedly, the former star of England and Manchester United, featuring the members of the committee that selects the people who will be given the title of “Sir” as “ungrateful…”. Saying, however, that “I don’t care to be a knight”.
Still blame him that he didn’t want to give the amount of one million dollars to “Fund 7” by saying that “if it wasn’t for the fund, the money these would be mine. these c… money is mine”.
However, after the furor that erupted spokesman for Beckham said that the leak of the counterfeit message was intentional in order to present an inaccurate and doctored those of the star.
“This story is based on older hardware e-mail that was stolen, and was disguised, giving deliberately an inaccurate picture,” said the representative of Beckham and added: “David Beckham and Unicef have a strong working relationship to support the children for more than 15 years, David and Unicef are proud of what they have accomplished and will continue to work together to ensure that they are happy to leave a project behind them. The facts speak for themselves”.
While he stated that the Fund 7 has raised millions of pounds for children affected and added that Beckham has “given considerable time and energy” and has spent his own money for the initiative, donating and even the profits.
Notice of defense of the former football player issued and Unicef saying that it is the agency’s “extremely proud” of the work of Beckham, by praising the efforts of the 41Ï‡ÏÎ¿Î½Î¿Ï… star for both the awareness of the world as for the personal funds, which has been offering in charity work.
Beckham is an ambassador for Unicef since 2005 and has appeared in various charitable campaigns of the world organisation. The Fund 7 has undertaken to carry out many projects including in Burkina Faso, Swaziland, Papua New Guinea and Cambodia, in order to address issues such as poor water quality, lack of sewage system, malnutrition and the infection of HIV in mothers and children.
“We are proud that has given time, energy and support in order to increase the awareness of the world and to raise money for the work of Unicef and David has given important personal. We are extremely proud of the Fund & and for all that they have done for children,” said Unicef in its communication.
However, sources close to the British ex-footballer argue that it’s not going to stop the charity action and that will continue to work with Unicef, insisting that the charity action was not as an incentive to enhance the chances of return of the title “Sir”.