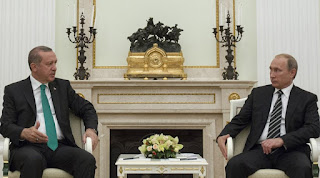 Turkey is watching “closely” the Russian military activities…
on its borders with Syria, as well as in the ÎšÎ±Î¼Î¹ÏƒÎ»Î¯, in northern Syria, according to Turkish media, developed Russian military and engineers, said today the afp a source close to the Turkish government.
“I can tell you that Turkey is watching obviously closely any military action on its borders, primarily the border with Syria,” explained the source, which asked not to be named.
The Syrian Observatory for Human Rights announced that “several dozen” Russian soldiers and engineers were seen in the last few days at the airport of ÎšÎ±Î¼Î¹ÏƒÎ»Î¯, which is located just across the street from the city ÎÎ¿Ï…ÏƒÎ¬Î¹Î¼Ï€Î¹Î½ of south-eastern Turkey.
According to the Observatory, the military they have inspected the airport, which is still under the control of the syrian army, and “possibly” to expand and enhance the safety to be able to accept Russian military aircraft.
The ÎšÎ±Î¼Î¹ÏƒÎ»Î¯, a city in which the majority of the inhabitants are Kurds in the province Î§Î±ÏƒÎ¬ÎºÎ±, is under the control of local kurdish authorities and the syrian government.
To a question yesterday about the Russian military presence, the vice-president of the Turkish government Î¤Î¿Ï…Î³ÎºÏÎ¿ÏÎ» Î¤Î¿Ï…ÏÎºÎ­Ï‚ replied that I don’t see there is any “threat” for Turkey.
“We are aware of the movements of Russia. The Russian units in the ÎšÎ±Î¼Î¹ÏƒÎ»Î¯ may not be a threat to Turkey, a country member of NATO”, said in parliament.
Source