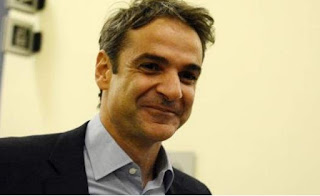 With decisions of the President of the New Republic, mr. Kyriakos Mitsotakis proposed by the Secretary of the Parliamentary Group and…
the five deputies and appointed Members of parliament and the Spokesman of the Party.
In particular, for the position of Secretary of the Parliamentary Group of New Democracy proposed by the member of parliament Karditsa former deputy minister, mr. Konstantinos Tsiaras.
For deputies to the Secretary of the Parliamentary Group suggested members: Konstantinos Vlassis (Arcadia), Stergios Giannakis (Preveza), Athanasios Kavvadas (Lefkada), Andreas ÎšÎ±Ï„ÏƒÎ±Î½Î¹ÏŽÏ„Î·Ï‚ (Achaia) and Christos ÎœÏ€Î¿Ï…ÎºÏŽÏÎ¿Ï‚ (Magnesia).
In addition, by decision of the President of the New Republic, mr. Kyriakos Mitsotakis stated:
First Spokesman, mr Nikos Dendias, mp Bâ€™ Athens and a former minister.
Second Parliamentary Representative mr. John Yesterday, a member of the Cyclades and a former minister.
Tuesday’s Parliamentary Representative, mrs. Niki, a member of State.
In the position of Spokesman of the Party is the mp for Athens B, mr George ÎšÎ¿Ï…Î¼Î¿Ï…Ï„ÏƒÎ¬ÎºÎ¿Ï‚.
Even with the decision of the President of the New Republic, mr. Kyriakos Mitsotakis placed deputy Secretary of the Political Committee of New Democracy mp of Heraklion, mr. Lefteris Î‘Ï…Î³ÎµÎ½Î¬ÎºÎ·Ï‚, which is defined and link of the Party with the Parliamentary Group.
The chart is missing the part adonis Georgiadis and Kostis Hatzidakis, something that feeds the scenarios for the issue of the vice-presidents.
Openings on all sides
Everything suggests that with exposures to all of the ÎµÏƒÏ‰ÎºÎ¿Î¼Î¼Î±Ï„Î¹ÎºÎ­Ï‚ wings and utilization of new members “builds” the new leadership team of the New Republic, the new president of the party.
In place of the first parliamentary representative appointed by the former minister, Nikos Dendias, while representative of a Type mounted member George ÎšÎ¿Ï…Î¼Î¿Ï…Ï„ÏƒÎ¬ÎºÎ¿ -both had support in the ÎµÏƒÏ‰ÎºÎ¿Î¼Î¼Î±Ï„Î¹ÎºÎ® battle for the leadership of Vangelis Meimarakis.
Surprise is the placement of Kostas Tsiara to the position of secretary general of the COE, which is considered to be a friend of Dimitris Avramopoulos.
For this position Ï€ÏÎ¿Î±Î»ÎµÎ¹Ï†ÏŒÏ„Î±Î½ Lefteris Î‘Ï…Î³ÎµÎ½Î¬ÎºÎ·Ï‚, who shall be deputy secretary of the Policy Committee, to prepare the party congress that will happen next February.
The interpretation of the options
From the Syngrou noted the long term experience of mr. Tsiara, and the fact that he has served as state secretary for Foreign affairs, interpreting the placement of the. For mr. Vroutsi noted that he won “with his sword”, which served worthily and as a parliamentary representative, making particular reference to the “battles” of social security and labour. In terms of the Victory of the Potter, reported-apart from the fact that they wanted a female presence – that is highly qualified, while they still have the european experience of mr. ÎšÎ¿Ï…Î¼Î¿Ï…Ï„ÏƒÎ¬ÎºÎ¿Ï…. Finally, in terms of deputies, noted that given space in the new generation, as well as elected for the first time in January 2015.