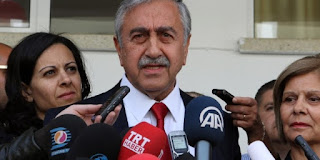 How to speed up the process of talks for a solution of the… Cyprus problem was discussed during today’s meeting, the leaders of the two communities, in accordance with the T/c leader Mustafa Î‘ÎºÎ¹Î½Ï„Î¶Î¯, who wished as 2016, arriving at a mutually acceptable agreement which will bring a better future in Cyprus.
As it is transmitted from the occupied territories, in statements after his meeting with President Anastasiades, mr. Î‘ÎºÎ¹Î½Ï„Î¶Î¹ said that the next meeting of the two leaders will take place on 26 February.
The T/c leader said that at the start of today’s meeting, discussed the declarations made by the r/k side for the last few days and the statements had to be made by the t/c side as a response to the statements of the r/k side.
He stated that in the second part of the meeting, they discussed ways to accelerate the process, from henceforth, noting that although progress has been achieved in four issues, however, remain some issues that will need to be discussed.
Mr. Î‘ÎºÎ¹Î½Î¶Î¯ wished as be no compromise on these issues in the near future, and then to conclude on the issues of territory, security and guarantees. She also expressed the hope in 2016 to be the year in which we achieve a lasting peace and a mutually acceptable agreement which will bring a better future in Cyprus.
In response to a question, the T/c leader has made it clear that there is no deadlock in the negotiations and that (the leaders ) speak for progress on difficult issues such as the property, which discuss in detail here, and on which there are some agreements and disagreements, as mentioned.
Even reported that it has been agreed that as the issues of the property and the guarantees discussed in the end, and for the issue of the rotating presidency, mr Î‘ÎºÎ¹Î½Ï„Î¶Î¯ said that the position of the two sides on the matter is known for to add that has not been achieved so far, a compromise on this issue, and how this compromise is inevitable.
Source