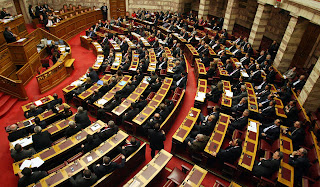 “The phenomenon of the ministers of the government to “turn their back”…
the parliamentary control was repeated today,” complains with an announcement of the River, adding that the result was that the time of the 19 questions to be discussed only the two.
In accordance with the River, the “truancy” of the ministers of the government of Tsipras from the House shows that you can’t let the rough and in front of their inability to defend the destructive policies with their behavior degrades the parliamentary process.
“In the past, the SYRIZA opposition ÏƒÏ„Î·Î»Î¯Ï„ÎµÏ…Îµ similar bad practices of ministers of the PASOK and the new democracy. Now the copies. It seems, that the virus of power is contagious!”, ends.
Source