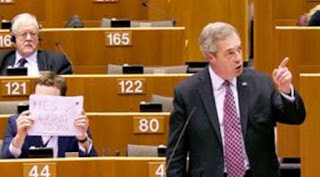 At the time…
Nigel Î¦Î¬ÏÎ±Ï„Î¶ had taken the floor to defend the decree Trump against the muslims, the Seb Dance, member of the Trade of England, obviously upset by the fact that the Î¦Î¬ÏÎ±Ï„Î¶ could talk without anyone to formulate a counter argument, as required by the regulations of the european parliament, picked up a piece of paper that read: “lie” with an arrow pointing the British right-wing mp.
The incident happened last Wednesday, as was natural, was broadcast live from the european parliament and makes the round of the internet.
Be noted that the Î¦Î¬ÏÎ±Ï„Î¶ he was wearing on his lapel a badge of the American president and said that “the decree was not against the muslims, but to protect the US from islamic terrorism”.
He insisted, indeed, that the decree is the proof of “the sovereignty of the united states” and criticized the european Parliament who did not support the decree by saying that he proves in this way “the true nature of the european project, the crude anti-americanism”.
The British mep, Labour’s acceptance of the comments by a representative of the european parliament.