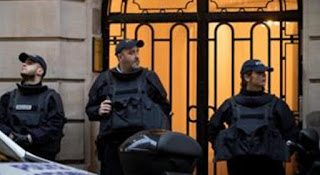 The perpetrator of the attack…
with machetes outside the museum of the Louvre, which he shot and wounded a French soldier, he refused to talk to investigators when of submitted questions as it was put officially in custody in a hospital, said today a source from the prosecutor’s office of Paris.
The 29-year-old Egyptian, who has been recognized by the authorities as the Abdullah Renta al Î§Î±Î¼Î¬Î¼Î¹, took several shots on the Friday after the attack that he unleashed against soldiers with two machetes, an attack which French president Francois Hollande described the terrorist.
“The first interrogation took place today in the morning but turned out to be short. For the time refuses to speak to investigators,” said the same source.
A soldier was wounded in the attack near the entrance of the museum, which was closed for the rest of the day and opened again last Saturday.
The perp brought a backpack, which contained a spray paint, but no explosives, according to police.