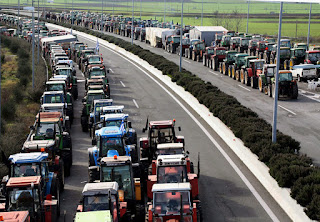 The refusal of the farmers of the blocking of Nice to be in Thessaloniki…
to participate in the meeting of farmers of the Tempi and other roadblocks was the first indication that the farmers are divided in two. And this was clear from the meeting of Sindos, prevailed when tension and eventually the departure of the block of Tempe.
The farmers had given a date at the congress centre of the industrial area of thessaloniki, at 12:00 in the morning of the Third (26.01.2016) to decide how they will continue the protests and if they will meet the prime minister after the invitation for dialogue by the last Saturday (23.01.2016) Alexis Tsipras.
But when in the Sindo reached more farmers than those who originally caused caused tension, frustration and problems in the process. Also appeared and farmers who do not participate in checkpoints, but they wanted to get into the convention center to take part in the meeting.
Finally, it was decided to enter into the meeting more than two people from each roadblock, as originally agreed, with the condition that we only speak of the representatives of the Î¼Ï€Î»ÏŒÎºÏ‰Î½.This was not the only moment of tension. Followed by another with the result that leave the representative of the block of Tempe, to protest the procedure and the prohibition of the ability to preside over. As he leaves, the representative of the farmers from the Tempi valley, Panagiotis Kalogiannis, stressed: “We have been described Î±Î³ÏÎ¿Ï„Î¿Ï€Î±Ï„Î­ÏÎµÏ‚, the bosses have no place here. To those who play Î±Î³ÏÎ¿Ï„Î¿Ï€Î±Ï„Î­ÏÎµÏ‚ them giving away the process,” he said.And made it very clear that there is, from their perspective at least, no intention to meet with prime minister Alexis Tsipras if you don’t withdraw the bill, and the dialogue does not become from a zero base.”As he takes back the bills say that we are closing down the houses and we are not talking from the ground up and don’t stop the ministers, wrecked the dialogue that’s going to happen, we’re not going anywhere”, he stressed.
According to information, there is the proposal to scale up the rural mobilisations and to move the farmers to an indefinite closure of roads, in order to persuade the government to take back the insurance bill and the plans for the tax.
Source