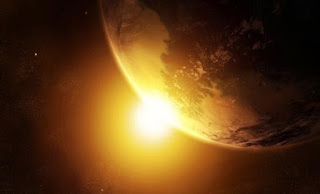 It may seem absurd, that we are now in the heart of winter, but the Earth has arrived at the so-called perihelion, the minimum distance from the Sun, on 07.18 uk time on the morning of 3 January.
At that time, the center of the Earth was the center of the Sun 147.100.176 miles.
From here, the planet will continue moving away from the star until it reaches aphelion on 4 July, so the distance will increase to 152.103.776 miles.
The distance from the Sun should, of course, is stable if the Earth was moving in a circular orbit. But in reality the orbit is elliptical in shape, although it is difficult to distinguish the difference with the naked eye.
Phil Plate, an astronomer who writes for Slate.com presents a chart that compares the Earth’s orbit (right) with a perfect circle. The difference is inconspicuous, about 2%.
But how could reaches the Earth at perihelion in mid-winter?
The answer is that the rotation of the seasons is not associated with the fluctuation of the distance.
The switch due to the fact that the axis of the Earth is ÎºÎµÎºÎºÎ»Î¹Î¼Î­Î½Î¿Ï‚ and looking always at the same point in the sky.
As a result, the north pole of the planet is bathed in permanent light for six months, so the northern hemisphere has spring or summer.
The rest of the six months, the north pole is plunged into darkness and the heat’s moving in the southern hemisphere.
In addition, the perihelion and aphelion don’t always come on the same date. Nor the seasons, since the axis of the Earth oscillates like a spinning top with a period of about 26,000 years.
And this means that in a few thousand years the seasons would have moved enough in the calendar, although the orbit of the Earth around the Sun will remain almost the same.