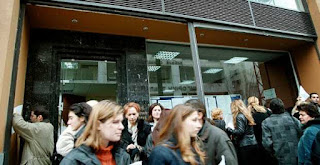 As it was written…
the aftodioikisi.gr, with two writing competitions for the recruitment of permanent staff right after the holidays and two notices of officials in the public and broader public through ASEP begins in 2016. Specifically, from Thursday 7 January starts the submission of electronic requests to participate in the notice of 1D/2015, relating to the filling in order of priority 121 positions of University and Technological Education in municipalities of the country, as well as the Deposits and Loans Fund. On Tuesday, 19 January will be held in Athens, the black and white contest of the ministry of Foreign affairs for the admission to the Diplomatic Academy 15 candidate Following Embassy.
By the end of the month will be announced the date of the written examination for the 32 Auditors of University Education in the Aviation Service. At the end of the month will come out and the government GAZETTE for the 151 permanent Computer scientists in the courts and in other agencies of the State. The intake of 1.209 daily guards and 134 of night watchmen will proceed the ministry of Culture and Sport for the operation of museums and archaeological sites. At the same time, you will submit an application to the ASEP for regular Ï†Ï…Î»Î±ÎºÏ„Î¹ÎºÏŒ staff, in order to strengthen the services of professional guards. Finally, I would ÎµÏ€Î±Î½Î±Ï€ÏÎ¿ÎºÎ·ÏÏ…Ï‡Î¸Î¿ÏÎ½ 728 positions storage of antiquities, in cooperation with the ministry of Labour, through the program of community service.
Source